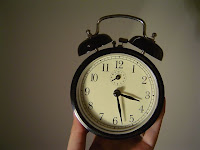 Well, I think I am going to give up on the idea of workplace applications for Facebook. In three hours I managed to find some long lost friends, see photos of people I know in various guises, and learn a bit more about some of my “friends” hobbies (must google Rufus Wainwright, might be missing something big.) But as much as I tried, I could not see an obvious non-leisure link to this social networking tool.

If I was being generous, I could say that it would help colleagues to get to know each other better outside the office. However, my non-rigorous research showed that not too many “Friends”are also colleagues in people’s lists. Maybe about 10%. I also noticed that there is still a big demographic slant, which goes without saying; the number of Friends seems to be inversely correlated with the number of other people you are doing laundry for.

So Lizzie (196 Friends) and Caroline (239 Friends), can you share your thoughts here -does your Facebook time add anything to your work? I’m not saying it should of course. I just wonder whether Facebook might be a part of our 9-to-5 someday; so far I can’t imagine how I could timesheet the three hours I just spent scrutinising thumbnail photos for signs of aging and poking people.

Followon TwitterSubscribeto RSS Feed
We All Have a Second Life Want to Learn More? Take this Quiz…
Scroll to top