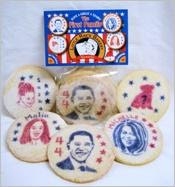 Active support for change can take many forms. Each act touches some group of people, potentially changes the way they think and (hopefully) what they do, and promotes the change further, connecting tiny points of light until a blanket of light shines out at us. When the actions are all taking us in the same direction, how powerful can that be? From a big city on the west coast of the USA to a rural village in eastern Switzerland, what innovative ways did change supporters get people’s attention and support for change last week?

For weeks before the inauguration of President Obama, Little Rae’s Bakery in Seattle has been selling the “First Family in Shortbread”. More than the good conversation that the cookies themselves produce, James Morse, the owner of Little Rae’s, explained on their website how this creative initiative demonstrates the bakery’s support for the new President and his change programme, encourages exchange, and takes the additional step to support community action. Here are some excerpts taken from their website (as is the photo):

In a few short weeks the nation will come together to celebrate the inauguration of the 44th president of the United States. As the country begins to understand the extent of the damage to our economy, the new president and his family are going to be looked to for leadership. The kind of leadership this generation has never seen – or needed.

At Little Rae’s Bakery, we’re bakers. That’s what we do. We decided to honor the entire first family to show our support and hope that when we stick together, when we lean on those closest, we are strongest. We’re pleased to offer you the First Family cookies. They depict the new President, the First Lady, the Obama children and even the family’s mystery dog. Since the Obamas couldn’t adopt a dog from the animal shelter due to a variety of allergies, we’re donating a portion of every sale to the Humane Society. We’d love to hear what you think of the cookies and have the chance to share the story behind them with you.

Creativity seems to be fundamental to raising awareness, getting people talking, and thinking differently. First Family cookies no doubt made an innovative contribution to this conversation, which was also going on where we live, some 5257 miles away.

We had a spirited discussion with our children last week around the inauguration due, as far as I can tell, to the action of the cantine workers at the local elementary school, which services a rural community of 2000 people in the French-speaking part of Switzerland. Cafeteria workers made a whole week of “American” lunches to draw the children’s (and by association their parents’) attention to the inauguration and celebration of change in the US. Every day I had delighted reports of hamburgers, brownies, chili con carne, hot dogs and doughnuts (for full effect, say each with a thick French accent), the like they had never had before. I am sure the cantine staff enjoyed putting that menu together made up of clearly crowd pleasers. And I heard lots of good things about Obama and America from my 5 and 7 year old, and no doubt all the other parent’s in our community did too.

There is so much noise in the system, and so much to do. Getting people’s attention, focusing them on change, and getting them to try different things – whether donating to a local charity, exploring a new culture though its food, or even (like in our organizational change process) taking time to attend a World Cafe, and identify ways to contribute to organizational effeciveness and renewal – it all benefits from creativity and innovation in approach. It gives people something to talk about. And aims to help people to get interested enough to take it that one step further. We can go for big change, little by little.