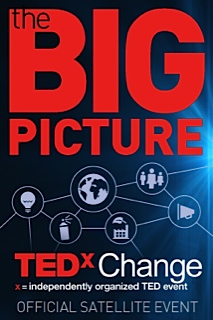 We held the TEDxGVAChange event in Geneva last Thursday; it was one of the 200 live events around the world that connected to the central TEDxChange event in Berlin. The Berlin event was co-organized by the Gates Foundation and, as all the others including ours, focused on issues surrounding global health and development. 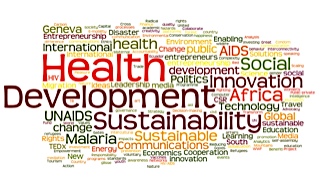 (above is the wordle we made from the participants’ “About Me” registration statements.)

The TEDxGVAChange event was exhilarating! And it benefitted from an amazing volunteer team, particularly apparent in the intense days and hours just prior to our going live. After months of identifying and coaching speakers (with amazing support from a professional speaker coach Laura Penn), finding sponsors, meetings and conference calls, sourcing props for the stage, and on and on – you get to the day (or in our case the day before and the day of…) and it all has to come together.

Here is a snapshot (literally) of what you have to do, after all the ephemeral talking and email, to the roll-up-your-sleeves set up a TEDx event like ours…

Let’s start the day before:

You have to pack up all your props to take them to the venue, because usually you are using a space that, for 99.9% of its time, is a square empty meeting room in a building. As a result it won’t necessarily have the quirky items you want to create a stage (or even a stage for that matter! We built our own stage, borrowed from the World Health Organization across the street). One of our team members, Christine Carey, was both a speaker liaison and our set designer. Here she is below with Lizzie packing up her carefully sourced props (budget: nearly zero) for one of the many trips to UNAIDS, which provided our excellent venue. 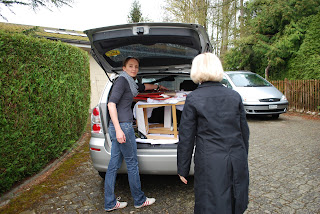 There, we worked with the tenacious UNAIDS team to create our perfect TEDxGVAChange space, and that included creating a black backdrop so that the video would look great, and maintain the TED black, red, and white theme.  Christine and Jean-Charles from UNAIDS had to figure out how to create that dark space in the light wood paneled room; the clever solution was to hang black fabric using velcro hidden in the corner seams in the ceiling… 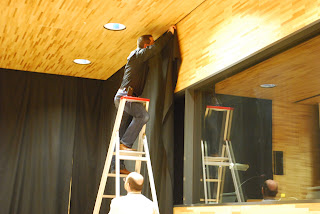 Of course all that fabric had to be ironed first (we had a team of perfectionists!), and while that was going on, others were getting on top of other things, like the social media side. Sharon Bylenga, below, also one of our speaker liaisons, was setting up and testing the TEDxGVAChange Twitter feed and sending through some early tweets. 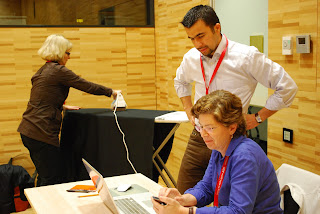 Also tweeting from #TEDxGVAChange was Sarah Bomkapre (below), a journalist from Sierra Leone who joined us to help with social media for the day, along with the creative team from UNAIDS including Mikaela Hildebrand. 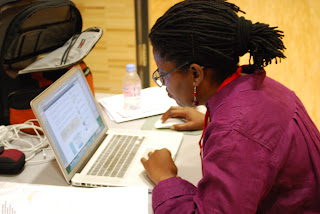 Once the curtain was up, the stage was set up and the props placed. We went for minimalist, and wanted it to look like someone was sitting at their desk reading a fascinating article and just got up to tell you about it (e.g. our speakers). 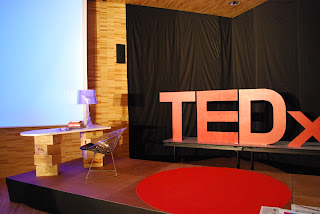 You can’t imagine how many opinions there can be on the correct angle of the table, which direction the wine boxes should face (shouldn’t the Italian wine box be at the back, this is Switzerland after all!), and so on. We put up our meter high red TEDx letters, and in front the “sweet spot” carpet where the speakers would stand to talk. The round carpet is important to centre the speakers on the stage for the audience and video, to dampen noisy heals while they walk, and to keep them from falling off the back of the stage!

Of course we also needed our own sign, which was fixed onto white foam board (the kind architects use to make models) and after a 50cm “lip” was scored so it would hang perfectly straight, it was attached to the table under the TEDx letters, and the table covered with black card stock paper. (I must admit, none of this had ever crossed my mind before, but Christine in her day job is a voluntary environmental and social standards systems expert, and has some of the highest standards for everything I know, and indeed, it looked fantastic!) 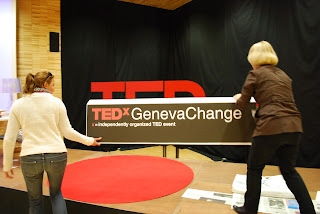 In the rest of the room, lots of other things were going on. Lighting, for example, is very important for the video, and also for ambience and drama. We borrowed a set of lights for our visual facilitators, Sarah Clark, Raj Rana and Elizabeth Auzan,  to use in the back of the room where they would be working, drawing a 90cm wide and 133cm high panel for each of our speakers’ talks. We also rented some brighter spots from a DJ sound and light distributor for the stage (everything but the mirror ball – that’s me below!). 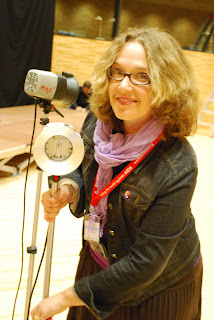 Our biggest budget item was the video team – their time filming, and post-production – because we wanted the video quality to be excellent – all the videos go onto TEDx.com where they can be viewed after the event (some of the best even get to TED.com). The film crew flew in from the UK to set up the day before and run tests during all our rehearsals on the morning of the event.

Here are Alasdair and Chris at the start of their set up – we used three cameras for filming, and one additional camera was connected to a computer for our livestreaming (we had over 500 people joining us virtually). 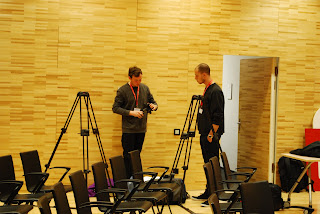 Once the room was set up with stage, lights, camera and sound, there was one PPT presentation to create with all the images of the talks in sequence with black slides in between (so we didn’t have to fiddle around with changing files). We waited until just before the event to prepare this, as the speaker order was only set on the day of the event, after the rehearsals. We did this to have the most logical and the most interesting sequence of talks. Once the order was set, Lizzie and I as the hosts, wrote up the connections in between the talks – we would be on stage together for the opening and closing, and otherwise would take it in turns connecting the talks and introducing our speakers. We wrote the script based on the speaker order, in the final hour(s) before the event started. Here is Lizzie working on the slides… 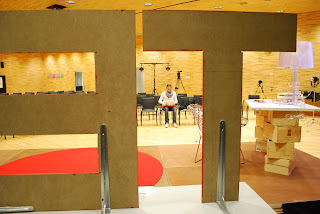 Our event was scheduled to start at 15:00, first with our local speakers for 90 minutes, and then after a tea break, we would cut to the TEDxChange simulcast in Berlin. To prepare on the day, each speaker had 1 hour of rehearsal on stage and we practiced everything from coming up and down the steps, waiting for the applause (human nature seems to be to bolt as soon as you are done talking), and going through each talk at least 3 times with Laura, our speaker coach. Repetition came along with some breathing exercises, little walks to warm up muscles, and pep talks (being a TEDx speaker can be rather terrifying – at least I thought so when I was a speaker at the last TEDxGVAChange event!)

Here is Laura rehearsing with Tjeerd Royaards, one of our five local speakers, who is co-founder of the Cartoon Movement – a network of cartoonists who do investigative cartoon journalism: 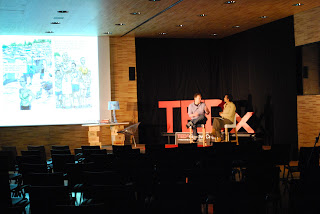 … only THEN we were ready to welcome our participants and start the event! 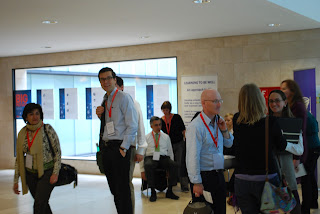 Everything after the doors opened, for me, is a bit of a blur, and seemed to go so quickly. Thankfully, however, you can see more photos of our event on the TEDxGVAChange FaceBook album that our terrific photographer from UNAIDs, Olivier Borgognon, took, including photos of all of our speakers and the final drawings from the visual facilitation team. It was an exciting day! 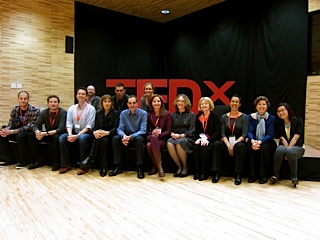