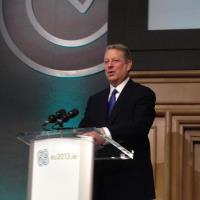 First of all, I wouldn’t dare give any tips about what exactly to do when you have Presidents, Vice Presidents, members of a Royal Family etc. involved in your event. In my experience, every country has its own preferred protocol, and you can be sure that these high-level people also have a team around them who can help you understand and follow it. Normally if you send an invitation that is accepted by one of these people, the response will come from their office and potentially with these protocol instructions – if not immediately, then ask, you will absolutely need it in designing your sessions with them!

I did however want to make some observations about what kinds of things might be involved in working with protocol for these high-level speakers (as often they are coming in and out of plenaries to address your group.)

I recently worked on a large event on hunger, nutrition and climate justice which brought together 350 high level policy makers and decision makers with  farmers and herders and fisherfolk (mostly from southern countries) to connect the policy landscape with the actual landscape. As work in the policy arena storms ahead on the post-2015 Development Framework and the SDGs (Sustainable Development Goals), the event aimed to help those involved at the intergovernmental level base their work on a better understanding of the rights and realities of the lives of the people most affected.

It was an exciting event and because it had lots of buzz, those high-level invitations were answered positively, and the event was hosted by the country’s President, and attended by a past President, the Deputy Prime Minister, another country’s Former Vice President, and many Ministers from all over the World, heads of various UN Agencies, etc.  So there was a lot of work to make sure that all the the right protocol was followed and also built into the design of the event.

Here are some of the things that I noticed that we needed to include in our preparations:

It is always exciting for participants to have the opportunity to be addressed by very high-level participants, and as noted above, this will always come with some how to instructions by their helpful offices. These inputs can be ceremonial and also contribute some additional gravitas to an event, they can help bring attention to your event from the Press and others, they can underline its importance and help connect what you are doing with what is going on at that level of decisionmaking. And an added bonus might be a warm handshake and a thank you from someone you have only seen in the news, as I received at this last conference, which is always nice to receive.

(For more information on the conference see: The Dublin Conference on Hunger, Nutrition and Climate Justice)

Followon TwitterSubscribeto RSS Feed
Tips for New Facilitators: What If No One Answers My Question? How to Say “Yes” to Projects: A Policy Guide for a Small Social...
Scroll to top