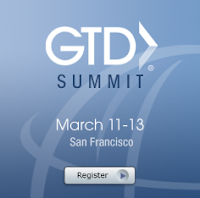 The Getting Things Done Summit: Changing the Way the World Works, is being held this week in San Francisco. I am here to speak on two panels – one on “Good Things Getting Done: GTD Serving Service” and the second on “GTD and Education”. Both are today and I have just put the finishing touches on my contributions, which I will post tomorrow.

The formal opening is in about an hour, however, I have already started to learn things – informal learning as you know can happen anywhere. In this case it was at the opening reception last night.

I went into the reception rather early and immediately had a string of amazing conversations with the other people attending. Mostly from the private sector, they represent a group of people who are productivity experts, motivational speakers, leadership coaches, entrepreneurs, and innovators. Is this just the Bay Area of California? Is it David Allen’s peer group? Above all it is an eye-opening collection of people, and a very unique environment in which to think and learn. (After that reception, I immediately went back to my room and rewrote my interventions.)

I was engaged in conversations by people who get other people going. One man runs a gym outside of LA which has a specialised workout that would normally take 90 min, but has so many effeciencies built in that it can be done in 20 min, for busy executives. He is using GTD to increase the productivity of his offer to service the demand of his clientele around time saving. He was incredibly convincing, it didn’t sound at all like snake oil to me.

I met a leadership coach with whom I swapped anecdotes about using haikus in training to help with reflective practice and synthesizing ideas. She also told me to look into using sutras for a similar reflection activity, and to help people work out their arguments for or against taking some action.

Then I met someone who works for the Hunger Project, who was inspired in the 1980’s by Dana Meadows and John Richardson who were on the Board at that time. After many years in business left it all to join the Hunger Project team. He has worked in India helping to train women entering municipal leadership positions – the 1m women entering local government resulting from the legislation passed in 1993 to include them.

Each person spoke with passion and warmth, clearly articulating their motivations and goals, they networked and knew how to have a good conversation and move on. Many had written books, many were also speaking, now I am getting nervous… must go and read my notes….