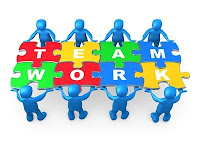 We wrote a blog post recently called Don’t Outsource It! Learning from Reporting, which talked about why the facilitation design team should NOT take on the reporting role in a workshop. Keeping the role in the contracting team helps internalise rather than externalise the learning from the event and process. We wanted to follow up with a practical design on how to do that. Below is a description of a sequence that we used recently at a retreat, which was designed also as a team activity to further support the group development objective of our event. Reporting was not an add-on, but a session in our workshop.

The 2-day retreat had 20 people from a distributed team (people located in 3 geographical locations), that had not worked together as a Group before. So practice doing that, in a way that promoted good intra-Group communication, sharing roles, and co-creation would be a great way to model the desired behaviour of the Group in the future. This reporting task could help do that if we structured it with this outcome in mind. The process design would be important: We needed a way to distribute the roles so that it was equitable, showed the contribution of everyone to the final group product, and produced a useful and internally-owned synthesis of the discussions and outputs generated during the retreat. Here is a description of the sequence designed:

First, identify the key outputs/report sections: Our first step was to take the agenda and identify the sessions which would have outputs that would need to be collected (think quality, not quantity). We lettered these (A-Z) and wrote them up on a flipchart matrix, with the Session numbers and titles of the topics upon which the lucky person would report, and leaving a space for a name. The reason we used letters for the outputs was so it would not get confused with the sessions numbers. Some sessions had multiple outputs, so to share the load, these sessions would have more than one rapporteur for different identified pieces.

Second, prepare your materials and space: Next we created a set of cards with A-P (in our case, as we had 16 inputs to the report) written on them. We prepared our flipchart matrix(as above), and we cleared an open space in our room where the group could make a circle. Finally, in our set up, we picked a number from 1-21 (the number of participants), and wrote it on a small card which we put in our pocket.

Third, brief and set up the reporting exercise: We told people that we would practice creating a group product by sharing the rapporteuring role among the team to create a product from our meeting that would be useful for the Group’s future work together.

Fourth, run the activity: Then we went into our activity sequence, described below…

Throughout the event, we wrote the names of the rapporteurs at the top of any flipcharts or artifacts that the group created. At the end of the event, people took their materials from the sessions for which they were responsable (so room clean-up was extra easy!), and we reminded people of the deadline in the final session. A week later, the report was finished (probably much faster than if one poor person had to write up all those flipcharts).

A great group product was created, and many more people got to think about and put their fingerprints on the different outputs and ideas that the team retreat created. Rather than a report that sits on a shelf, a learning output and process was designed that lets the group practice working and creating together, just like they will be doing from that point on. (Nice design Lizzie!)