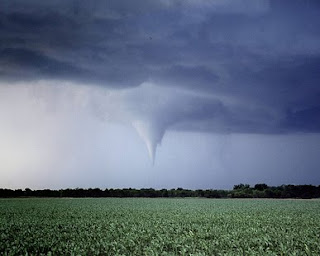 I am just about to comment on a PPT presentation that a couple of elementary school students made about what to do in case of a tornado (Among other things: Seek shelter under a sturdy table in the basement. If there’s no basement available, go to a first floor, small bathroom opposite of the tornado. Did you know that?) A teacher in Pickerington, Ohio (population 9,792) is running a timely project with his class on extreme weather conditions, what causes them and what to do.

But they aren’t making posters and standing up in front of their class (well, they might be doing that too.) They are doing their project using social media, so their learning becomes the learning of many. The students are doing their reports on tornadoes and hurricanes and the like in PowerPoint (with very nice visuals and lessons in word count that any good conference presenter should know). They are posted on a website in blog format, and they’re inviting comments through word-of-mouth viral spread from all over the world. To incentize interaction, they are giving the teams with the most comments, and with the comments from the furthest away, a prize. (Thus the reason I was called in I guess – an Ohioan who cares about tornadoes, based in Switzerland.)

The comments they are getting are interesting too, lots of positive feedback on their delivery, extra information and geographical comparisons from people who live far from their small mid-western town. No amount of classroom interaction would get them that.

I’ll put the link here, just for now, in case you want to go and give them some information on extreme weather events from your part of the world. As our climate changes and social media is just the way things are done, these kids will be doubly prepared!

Followon TwitterSubscribeto RSS Feed
An Amazing Group of People: Have a Party, Play a (Social Learning) Game!Preparing a Presentation? Read this Praise for Prezi
Scroll to top