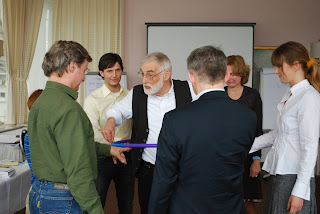 Can you imagine getting an invitation to a workshop that has as its main goal playing 20 games? Would you go?

Those invitations went out a few weeks ago, and we had a very good response to a test workshop we held in Bonn aimed at playing and discussing 20 games that deliver messages around climate change, using systems thinking concepts.

Dennis Meadows, Linda Booth Sweeney and I have been working together for the last few months to take 20 games from the original Systems Thinking Playbook, written by Linda and Dennis, and adapt them for climate change learning. That process is more complicated than you would think! We each have 6/7 games we are working on, originally selected from a larger number in the original book, and folding in climate change messaging is like a dance. You need to deeply understand the dynamic of the game and what happens (or could happen if adapted). With that in mind you need to move your focus over to the climate change world and consider related dynamics, whether in the natural or human (political/economic/social) systems. Then it is an iterative thought exercise to bring those two elements together so that they work elegantly together in the end and are not too contrived.

Sometimes it is very obvious how the game and the key climate change learning points link and relate. And sometimes it is like doing sudoku in your head. It took us from 6-8 hours per game (so far) to make the connection strong enough to use.

There are different ways to make this link (between the game, climate change and systems thinking). You can change the frame of the game to put people in a climate-related context while they play. You can use the debriefing questions to guide people in making the link with the climate debate or dynamic. You can put in data, an observation, quotes from climate specialists, or elements from the news and current events to anchor the game to climate change. Or in some cases you can play the game and ask people what the link is (of course you need to have an answer too in case you draw blank stares).

We tried all of these approaches in the test workshop for our 20 games. They all worked in different ways. Of course, we were fortunate to have a room full of climate and games specialists, which our partners from GTZ (GTZ Climate Task Force) had invited, to play through the games, analyse them and give us great feedback to further strengthen the climate learning.

Our agenda was simply a list of games, and our table of contents will be that too. So we wanted to create a of narrative that held them together, a thread that helped facilitators and educators understand how they might use them. We created two organizing principles for the games day, which we will also use for the book.

First, we used a systems “map” as the organizing principle. This was a stock and flow diagram with stocks such as CO2 in the atmosphere/ocean, heat in the atmosphere, and ice cover, and flows like CO2 emissions, heat in, heat out, ice melting, etc. We had that up in our workshop room and positioned the message from each game around these elements (sometimes before and sometimes after the game). It was not too much of a stretch to map out the lessons from the games – some of which were about natural aspects, and some were more human system dynamics with communication messages, collaboration and competition, etc. We found it useful, and people appreciated this signposting to pull the games together.

The second way of clustering the games was by use. Some of the games are mass games which can be used for large audiences, who might be sitting in an auditorium. They can be used during presentations and speeches to make points, and people can play them sitting in their chairs. Some of the games are demonstration games, which a small number of volunteers can play for a larger group of say 35-50, and the lessons will become obvious to both those playing and watching. The third type of game is a participation game which everyone needs to play to draw the learning, so this would be for a typical workshop size group of 10-25 people.

We also used materials as a criteria for selecting the games initially, not wishing to have any of them be too materials/equipment intensive. In the end, our games kit included: Ropes, balls, coins, paper cups, markers, scrap paper, pens, hula hoop (collapsible), ball of yarn, a newspaper, and a rubber chicken. (I always worry about a customs agent opening my bag in a crowded place.)

We spent 8 hours that day playing our games, each of which run from 2 to 25 minutes in length. We used a 10-minute plenary discussion after each game to identify with the participants ways to strengthen either the game mechanics or the climate change frame and lesson. We also used a Games Review Sheet, so that people could note any thoughts they had during the day individually. I came away with over 50 pages of notes and ideas!

We are now integrating the ideas, revising our games and their write-ups, each of which is from 3-5 pages and written for the facilitator. There is still plenty of writing to do to produce the book and we hope to finish in July. It never made sense to sit at our desks and write games. This test workshop was an important and useful step in the process. There is a saying in gaming that you have to test play a game 10 times before it is really good. We have all played these games dozens and dozens of times in their original format. But they’re different now in some subtle and important ways, so this was an important step in “the making of” The Climate Change Playbook.

Followon TwitterSubscribeto RSS Feed
Search Revolution: Social Media Can Save You Time (With a Little Help from Your...The End of Boring: Borrowing, Adapting, Mashing for Facilitators
Scroll to top