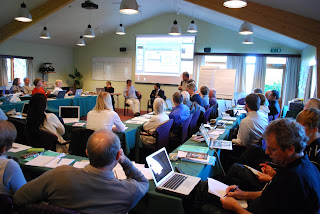 We started our annual Balaton Group Meeting this morning (held this year in spectacular Selfoss, Iceland). Our topic this year is “Food Futures” and we have already heard several speakers on the topic, including Karan Khosla (Earthsafe in India) who presented a systems model aimed at conceptualising the issues. John Ingram from the Environmental Change Institute (Oxford) shared with us some shocking facts like 15-50% of all food that is grown is lost between the field and the plate. With him we explored the suggestion that alleviating food security by reducing food waste is much cheaper and more environmentally sustainable than just increasing food production. Other Balaton Group Members wondered what reducing waste would do to the GDP (the growth of which might depend somehow on this waste) – an efficiency and resilience discussion will follow in our afternoon Open Space workshops.

We also had 2 brave Pecha Kuchists on the topic: Laszlo Pinter, formerly of International Institute for Sustainable Development and now at Central European University on gathering agri-environmental evidence through an indicator process with OECD. Andrea Bassi from the Millennium Institute was the second, speaking about the agricultural aspects of UNEP’s Green Economy Initiative.

We are currently in discussion and some very interesting ideas have come up, particularly sparked by a presentation about soil by University of Iceland Professor Vala Ragnarsdottir. She noted that currently soil erosion is 100 times faster than soil formation – and suggested that soil is a finite resource.

A systems map showed that the interactions of soil, people and food depend also on oil and mining (phosphorous). When these resources are gone/limited, what can soils deliver themselves and what can they recycle?

This brought up a few observations, such as the notion of “Peak Food”, mentioned by Alan AtKisson, which sent shivers down our spines.

Our Thai Balaton Group member, Professor Chirapol Sintunawa, noted that Iceland is importing topsoil from around the world every day (through importing food from countries such as his). This took us into a discussion of the notion of “embedded soil” (as opposed to, or in addition to, embedded or embodied energy in the lifecycle of goods). Could this be a new part of the accounting methodology that helps people make decisions around use of goods?

Oh, the Balaton Group – an annual opportunity to disrupt our paradigms and challenge our mindsets, and be with old friends who feel the same way.