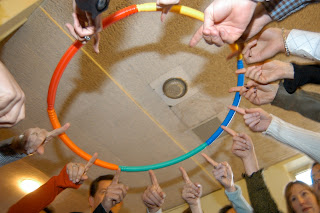 I just had a suggestion come in to help make job interviews more informative, and therefore increase the potential of finding a match between the candidate, the position, and team within which it sits. How do you learn enough about someone (and help them learn enough about you) to make this important match successful?

Traditional interviews often start with “Tell us a little about yourself” and end with asking the candidate a series of standard questions that have been developed to give some insights on how people will approach the task being advertised. The sampling of information about the interpersonal elements comes during a 30-60 minute timeframe, during which everyone on both sides (supply and demand) are in an entirely artificial and often rather awkward situation. If you wanted more information, and a different kind of information, why not play a game?

What an interesting interview, from the candidate’s perspective, if you were asked to play a problem-solving game with the whole team – it could explore notions of team development, communication, trust, leadership or any other number of important team elements. It could also feature some good debriefing questions (What metaphor does this exercise bring to mind? When have you seen these dynamics/behaviours before? What did you do? etc.) which would help people share a bit more (all around) and with a great deal of nuance about their paradigm of team work and their approach to work more generally.

If you were hiring a trainer or facilitator, you could even ask them to bring in the game and run it for you (we did this at LEAD when we were hiring the next Director of Capacity Development). We actually looked forward to the interviews and could see people in a familiar and comfortable role (than sitting in a chair on the other side of a long table!)

An added benefit for the recruiting team is that it is more fun to play a game than simply sitting in interviews all day and asking the same questions (change the game each time to keep them on their toes), and it provides a team development opportunity that is valuable whatever the outcome of the interview.

Thanks, Andy, for the idea!

Followon TwitterSubscribeto RSS Feed
Meetings Too Long and Too Wordy? Try a Twitter MeetingTime to Reflect: Cooking Up Your GTD Weekly Review
Scroll to top