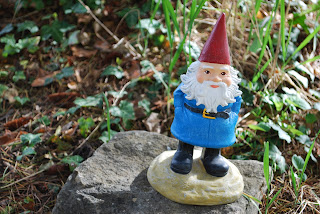 I won this gnome two years ago, a prize selected by my cousin who was organizing our annual Ohio family reunion. It was the gift for the family member who had travelled the furthest, and as I had come from central Europe, I easily won this award, and she knew I would. She had picked this piece of tchotchke for both me and for herself; our sensibilities were similar, and this Travelocity gnome reminded us of how far we had gone from our own farmtowns in the Midwest. She herself had lived in the UK for many years and had often contended for this title, and today…

If someone saw this gnome in a second hand shop, it would be no more than a piece of useless plastic, probably not weather proof so not even a garden variety gnome. However, with a story its value changes. But don’t take my word for it.

I was fascinated recently by a Studio 360 piece called In Search of Significant Objects, which told of a social and anthropological project which “demonstrated that the effect of narrative on any given object’s subjective value can be measured objectively”. That is, that an object had more value when there was a story attached to it.

I have seen this myself at a recent house moving “giveaway” party, where a friend of mine was downsizing to a smaller apartment and laid out all the things, clothes, vases, belts, shoes and assorted stuff that she needed to give away. She invited a dozen or so friends and colleagues over to take things away. Initially some of the best things went; however, an enormous pile of objects was left until she started to pick things up one at a time and enthrall us all with their origins, with stories of travels to hard to reach places, special gifts from visiting dignitaries, traditional dresses worn at historic events, and made in secret moments of important meetings by the personal tailors of powerful people. Almost everything went, and with each item, the story of its origin and provenance which was now complemented by the new owner’s own story of where she acquired it, from a remarkable woman who had already lived 40 lives.

The Significant Objects project proved this too. Rob Walker and Joshua Glenn conducted the experiment by buying unwanted objects at thrift stores, for an average of US$1.25 a piece, then invited writers to create new backstories for each object and then sold them all on Ebay, for over US$8000. You can see some of the objects – from candle holder, Fred Flintstone Pez dispenser, craft doll, to a jar of marbles –  and read the stories on the Significant Objects website. ( An odd and somehow beautiful little story about the jar of marbles that gives the artifact a completely different meaning increased its value for a new owner from $1 to $50 dollars.)

I am curious about these findings in terms of what they can bring to learning and my work, I am not quite sure yet. Will people find knowledge and information, or your work or ideas more valuable when there is a good story behind them? I guess the best speakers know that. Will people value and remember the things we give them (both physical and conceptual) when we join their well-crafted origin stories to them? If we stopped and thought about our own stuff and stories, would we throw away less/buy less meaningless stuff?

I’m not sure how much I would get for my garden gnome, but now, remembering its story, I want to keep it.