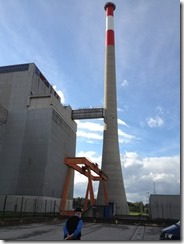 Today I had a real “You learn something new every day” moment – how often do you get an invitation to visit a nuclear power plant?

This afternoon I joined some Balaton Group friends to take a walk through the Zwentendorf nuclear power plant, located on the shores of the Danube about an hour outside of Vienna.
Our guide, the infinitely knowledgeable Wolfgang Kromp, Professor at the University of Natural Resources and Applied Life Sciences in Vienna and member of the Austrian Nuclear Advisory Board (and also a BG member), is an expert in all things nuclear and this historic plant in particular.

We started our visit with a “marketing video” in the main building. This video was made in the 1980s after the results of a referendum of the Austrian people prevented the newly completed plant from going into production. With a vote in November 1978 of 49.53% YES and 50.47% NO (a difference of under 30,000 votes), the plant which had taken 6 years to build with parts from all over Europe and at a cost of over a billion Euros, would split no atoms.

At that time, in 1978, the plant went into “conservation mode” for 8 years; that is, the workers carefully stored and maintained the machinery, and kept all the engineers on site waiting for a change in policy. But by 1985 it was evident that this would not come. At that point, the company started to sell off parts to various other power stations in Europe to recuperate some of the losses. Interestingly they started to buy parts back in 2005 because they repurposed the building into a nuclear security training center and a museum. Some parts came back, but some didn’t because they had suffered too much damage to be safe. 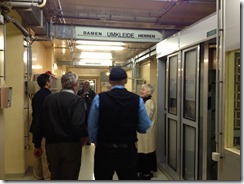 Our visit then took us over to the plant, where we entered the main entrance and saw where workers would come in and change out of their street clothes into bright yellow underclothes and a yellow or blue jumpsuit uniform, before going into the plant. 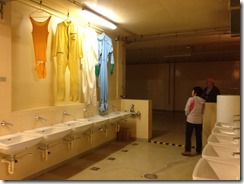 When they left for the day they would change out of their uniform (these clothes could never leave the building), wash and take a shower. 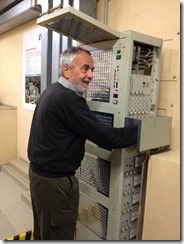 After that they had to stand on a scale and put their hands in a monitoring machine which would monitor gamma rays. If they were ok, they could leave and if not, they would suffer the “torture” of a hard body scrub, as Wolfgang put it, that would take off what seemed like layers of skin. 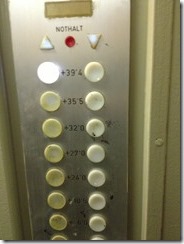 Then they would go up in the elevator to their work stations. This was interesting – nuclear power plants don’t have floors, they have elevations, so you go up to the top at 39.4 meters, and then come down to 35.5, 32.0 etc.

We went up to the top of the plant and walked down to see the different parts of the plant. 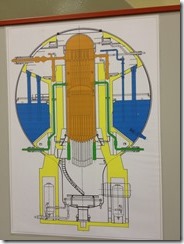 At 39.4 meters we saw the upper hall (this is the equivalent of what was destroyed at the Fukushima disaster) and here we could look down into the reactor vessel, which would have been the core of this 700+ megawatt plant. 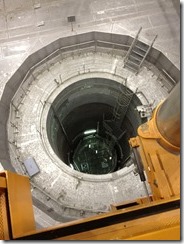 We saw the (empty) fuel rods as well as the pond for spent fuel rods (water would have filled these ponds to contain the radiation). 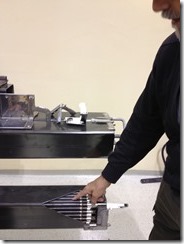 In a working plant, the spent fuels rods are moved from the reactor core after four years of use (every year 25% are moved), and taken underwater by crane to the spent fuel pond. Here they would be kept until they could be moved, still underwater, to another pond (this poses a problem as often there is nowhere else to take them).  Most of the radiation in the plants is in these ponds. In the below photo these cement cavities would be filled with water – the far pond, accessible through the narrow vertical door between ponds, is where the spend fuel rods would be stored until moved further away.) 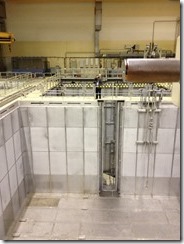 Water is used throughout the plant for cooling, containing, condensing. What I learned as well is that nuclear power plants are very inefficient. They only capture about 30% of the energy produced and the other 70% is released into the atmosphere or in heated water. For example, this 700 megawatt power plant would lose another 1400 megawatts into the environment in the form of heated water into the Danube and heat dissipating into the cooling towers and into the atmosphere. Because nuclear power plants are so far from cities, you cannot really capture the waste heat as it is not all that hot (300C compared to 600C in fossil fuel plants) and also costly to move long distances, among other problems.

Here’s the Danube right outside the plant. 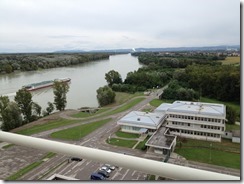 As we went down in elevation we saw the top of the containment vessel. 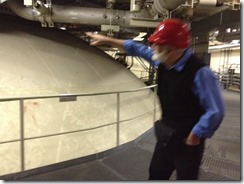 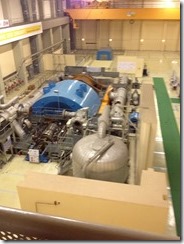 And into the control rod drive room (this is a translation from German and looked very much like a scene from Alien to me). 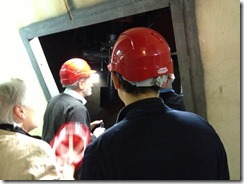 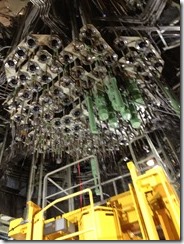 We finally ended up in the control room, where three different teams of 3 people would take eight hour shifts to keep an eye on what looked to me like a lot of machines that go “ping”. Right out of the 70s. 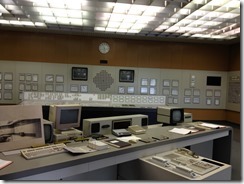 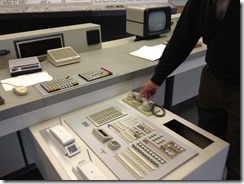 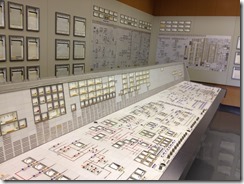 Overall, it was a rather sobering experience. Everything demanded such precision, such fine tuning, quick reflexes and the ability to look at hundreds of dials and data sets at any moment. How on earth you could not make simple human mistakes in here I cannot imagine.

Zwentendorf as a nuclear power plant was built but never opened as an active plant. Today it takes visitors and students on Fridays and is booked 18 months in advance. You can even take a virtual tour of the plant on the new owner’s website. Along the way it has been the inspiration for many unusual ideas for its use (such as a museum for “senseless technologies”, a children’s adventure land, a modern cemetery with the buried in glass cubes, and a venue for some Hollywood films). Today it is a renewable energy installation with citizen participation (with its 1300 solar panels sold out within a few days), a security training center, and a museum to remind the Austrian people of this decision so many years ago.

What a fascinating visit – with great thanks to Wolfgang and the team at ENV for hosting us! 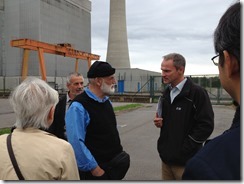 Followon TwitterSubscribeto RSS Feed
Waterfalls, Writing and Workshops: Working With Divergence and ConvergenceExploring Draft Zero: What I Look for in Your Facilitation Agendas
Scroll to top