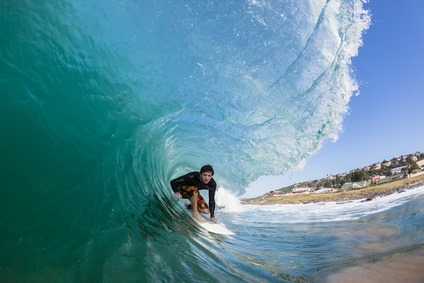 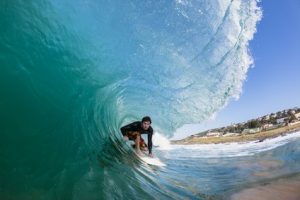 There I was, prone, my nose the requisite hand-width from the logo on the waxed board. Then, on command, execute sequence: paddle the air like crazy, then up on one knee, then two knees, stand up, body turn, arms out and ride that imaginary wave.

Surfing seemed pretty straight forward there on the sand. Side-by-side on the beach we had 10 surfboards, and 10 wannabe surfers, being put through our paces by the surfing instructor before we ran into the water with our boards. Cool! Well…

I spent the first half hour of my 90-minute lesson just trying to get on the darn board without falling off the other side. That was already rather humiliating, but I had the water to hide in (frequently and head first). Once I could actually get on the board, turning it around so it was facing in the right direction was my next challenge, and doing so without getting caught broadsided by the waves that were coming in with frustrating regularity, as waves do I guess.

Then I found myself miraculously on my board, facing the beach (at frighteningly close range) and hearing the surf instructor shouting “PADDLE!” at me. I paddled, and rode my wave onto the beach –  on my stomach. It was surprisingly comfortable but, I was assured by my sons, not the way to do it.

There were several thousand witnesses on the beach that day, watching me fall off my board, belly surf onto the beach and twice get up onto my knees but no closer to the standing cool of the little kids and my sons dude surfing around me. All in all, I spent at least an hour humiliating myself and the rest of the time underwater.

That was a sunny day in Rhode Island, let’s go to the other side of the Atlantic Ocean now, to Newcastle University in the UK.

Thirty volunteers were recruited recently for an experiment that began by subjecting them to a barrage of problem-solving, memory and reaction time tests to set a baseline. Then they were randomly assigned one of three activities to do for eight weeks and went home.

Members of one group had to walk briskly for three hours a week, a vigorous exercise that kept their hearts pumping and their brains deliciously filled with oxygen-laden blood.

A second group played Sudoku and did puzzles like crosswords for their three hours a week. Comfy in their lounge chairs, their brains were constantly being challenged and titillated solving these brain teasers.

The third group spent their three hours each of the eight weeks staring at a naked man named Steve. This was actually in the form of a life drawing class, where Steve was the model.

And eight weeks later, where were our volunteers now?

As expected, the walkers made great strides in their general health and fitness. The puzzlers became addicted to Sudoku and presumably proudly got their solving times down from double to single digits and competitively went on to harder and harder puzzles.   And the life drawing group? They enjoyed it! But when the scientists re-ran their cognitive tests, which group do you think made the most brain progress? What’s your guess?

If you guessed Sudoku, you would be WRONG.

The life drawing class made the most progress in cognitive skills of memory, reaction time and problem solving –  why?

BBC news, who reported the experiment, quoted clinical psychologist Daniel Collerton as saying “Learning something new engages the brain in ways that seem to be key. Your brain changes in response, no matter how many years you have behind you.” Learning something new improves your brain function and memory! Yes!

Now, let’s go back to my surfing lesson, as embarrassing as it was. That was (obviously) completely new for me. Trying to do all those coordinated moves, that the instructor was telling me, in the right sequence, for the first time, definitely engaged my brain as well as my body. The life drawers in the study saw brain benefits from developing their psychomotor skills by thinking about moving their hands to draw.

The life drawers also derived more health benefits and calorie burn from standing three hours a week for their drawing class (better than sitting – unlike our puzzlers, you can’t do Sudoku standing up). Although I was not standing, ever, I also was not sitting on my surf board (I was falling off it most of the time).

And finally the life drawers in the class were the most socially active of the three groups in the study, talking to each other and learning together, this social side also reportedly contributes to keeping your brain sharp.  My surf class camaraderie also produced opportunities for social interaction that did not always involve collisions, but lots of tips, cheers of support and peals of laughter (including my own saltwater chuckles.)

The Newcastle study concluded that “any group activity which involves being active and learning a new skill will boost your brain” and its cognitive function.

So the next time you’re laying on the beach and see someone learning something new, like surfing for instance, remember that they are improving their brain function and you are just getting a sunburn!