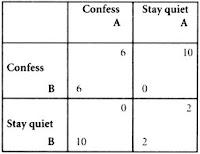 I had a tough day today, but since I am a Learner, I am going to see what I can get out of it…

One of the most famous zero-sum games is the Prisoner’s Dilemma. It explores cooperation, trust, and negotiation between two parties to a situation (two prisoner’s in separate cells decide if they are independently going to confess or not confess to a crime they jointly committed). One of the key messages of the Prisoner’s dilemma is that when each prisoner pursues his self-interest, both end up worse off.

I have used a game version of this in many negotiation training courses I have run in the past; interactive versions are called “Win As Much As You Can” or “Get As Much As You Can” (I think the latter is a version from the Consensus Building Institute at MIT in Cambridge, MA.) The game players use Ys and Xs to signal cooperation or defection (respectively), and scores are given to each player based on both what they play and what the other person plays. You think you would have an incentive to cooperate (both parties play a Y card), but if your aim is to “win” (whatever that means to you) actually in the short term non-cooperation can get you more points (as long as the other player is still cooperative or trusting). So you play an X card and the other player plays a Y card; that gets you lots of points and your partner just looks gullible – for a round. Of course as soon as they figure out that you are not to be trusted, they stop trusting you too, and play their X card, then both of you lose, or at least come up with a sub-optimal result (and that is definitely not winning).

Researchers have enjoyed playing this game thousands of times to understand the best strategy. It turns out that the best strategy is called “Tit for Tat”, (Anatol Rapoport). Here is what Answers.com says about that strategy, “The strategy is simply to cooperate on the first iteration of the game; after that, the player does what his opponent did on the previous move. Depending on the situation, a slightly better strategy can be “Tit for Tat with forgiveness”. When the opponent defects, on the next move, the player sometimes cooperates anyway. This allows for occasional recovery from getting trapped in a cycle of defections. “

So what does this have to do with my day? Well, I found myself yesterday in a discussion in which I felt like I had played a trusting card, a Y card, in a conversation about a dilemma that could be usefully solved. I felt that the other player played a Y card too, an open an trusting response, and we seemed on our way to getting a good score in this game. However, this morning, feeling good about my Y card, I entered quite positively into round 2 of the game where I played another Y card, when all of a sudden my partner played an X card. That put the game into non-cooperation. The other player got loads of points on that round. Here is where games become real life – what did I do on the next round? Did I play a Y card, to reinforce my cooperation? Or did I play my X card, to show that I was not too happy about the other player’s X card? Maybe if I had played a Y card here, then in round 3, my partner might have reconsidered, seen my cooperation, and played a Y card back to me, breaking the cycle of non-cooperation.

However, I did not. I was taken a bit by surprise by my partner’s move and I played what I think is an uncharacteristic-for-me X card back. Negative points in that round for both of us. Now we have a choice. If Tit-for-Tat with forgiveness really works, then an X card was perhaps the right card to play there, it signalled that there are repercussions for non-cooperation (even though it hurts a bit to play that card.) However, if I play a Y card tomorrow in round 3 (the forgiveness part), then there still might be a way to break the cycle. But that will only happen if my partner plays a Y card back. If another X card is played, then I have to decide – if I play another Y card, the economists would say I am a push-over. If I play an X card, then the downward spiral continues until the other player plays a Y card. Then I can play one back in tit-for-tat. But that might take a long time, and it would probably be by email. Hmmm…

How hard is it to apply this kind of theoretical learning to real life situations? This is frankly the first time I have tried. However, I am still a bit upset by playing my X card today; I think I should be a bit above it. Trying to apply the Prisoner’s Dilemma to the situation has helped me think through it a bit. The truth is, these situations are very wonderfully, imperfectly and often irrationally human. It also helps if your partner knows about game theory – but who else is reading and thinking about the Prisoner’s Dilemma right now but me?