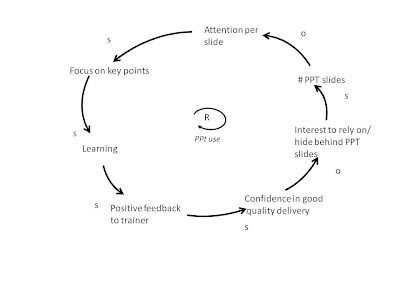 What kind of motivation does a trainer need to liberate herself from an unweildly PowerPoint slide set? What about the above – might that work for you too?

Last Wednesday in London I delivered a systems thinking module for LEAD Europe Cohort 14 (I was the Director of Capacity Development at LEAD International for 6 years). For several years at LEAD I delivered a systems thinking training module that had 5 heavy PPt files which contained over 140 PPt slides. People generally liked the module, and it was always a bit of a marathon and rather overwhelming even in its one day version.

Last week I delivered the module with the same learning objectives (common archetypes, goal setting, Behaviour Over Time graphing/Reference Mode diagramming, and introduction to Causal Loop diagrams), in half the time, and with only 2 PPt slides! Even with this incredible dematerialisation (literally and figuratively), people found the module incredibly useful and perhaps even more deeply so.

What could get me to break my dependence on that pile of carefully crafted slides, and get me closer to the point in half the time?

I knew that in the amount of time we had (4 hours) there was simply no way I could run through those slide sets and do the exercises. So I decided to change the format, and have me be the medium for content delivery rather than the slide deck. As a result, people really got more of me, the trainer, as I went through the steps with them of the various games and exercises, helped them identify their own examples for application, and coached them as they tested the two diagramming tools on these examples. Because they were interacting with me instead of the slide set, I got more immediate feedback, which gave me more confidence in what I was delivering, which in turn helped me to resist hiding behind an enormous slide set.

Here are a few other practical things I did to reduce my need for slides:

Overall it was an exercise in getting to the essence of the learning. Deriving the most critical points, and having people do all their learning through application. It was such a success, I will probably never use those 140 slides again!

Followon TwitterSubscribeto RSS Feed
My Point? To Be a “Story” There Must Be a PointVenue Checklist: What You Want to Know Before You Go
Scroll to top