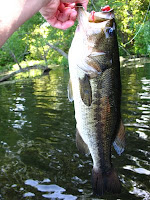 I wrote a post in March about learning through repetition, versus intense bursts of learning – so the benefits of 15 minutes of Spanish a day for 2 years versus the same amount of time in a one-month intensive each summer. This apparently deepens your neural grooves and helps you really learn something (See para 2 of Golden Nuggets from the GTD Summit – notice also Michael Randel’s comments about the timing piece).

Well, I checked that recently when I did two things that I have not done for over 25 years. I picked up my silver Stradivarius Bach trumpet and played a high school fight song, and caught four nice largemouth bass on a rooster tail spinner (albeit not at the same sitting, or standing, as it were).

I had no idea that this intrinsic knowledge was still there. It made me wonder what else there is still sitting in there waiting to be used, or re-used?

Indeed, 25 years ago, I played my trumpet nearly every day over a seven year period. I was in the marching band, orchestra and in a jazz band. I even got to leave school from time to time to play taps for military funerals in our small town. (Because I was paid for this I got a lifetime of confounding responses to the workshop icebreaker game “2 Truths and a Lie” -no one ever believes that I was a Professional Trumpet Player – it almost made standing in the snow behind a tombstone half a mile upwind from a 21 gun salute worthwhile.)

I probably played that particular fight song thousands of times. Any one Friday night football game, win or lose, would have produced dozens of opportunities to do so, not to mention the practice drills, and the end of every single, daily 45 minute band practice. I picked up the music for that song two weeks ago, looked through it and played it without hesitation, the second time from memory. My kids were amazed, they couldn’t even get a non-frog sound out of the instrument and they’d never seen me and a trumpet in the same room together.

Bass fishing was a similar experience. Over the years I have had a few opportunities to drop a worm on a hook into a farm pond and pull up a few bluegills. However, casting for large mouth bass with a spinner takes a little more than watching the bobber go under in shallow water and pulling up the fish. Although I found bass fishing again – getting the lure just where you want it and reeling in at the right pace – after decades of not casting, nearly as easy as that. I could even strike so that the bass were lip caught and could be happily released instead of having to practically surgically extract the hook, which never bodes well for their continued longevity as anything other than turtle bait.

Fish filleting also came with the memory package (the bluegills my boys caught), as I got to bring back those specific skills to create lunch. This was not like buying fish in the supermarket and taking off the skin, this was like taking the shiny excited fish out of the bucket of water and making it into tiny lunchable boneless, skinless filets. Something that as I get older and perhaps more sympathetic to vegetarianism, I find harder mentally to do, although I could do it almost mechanically and of course did it all the time without hesitation when I was younger and living in a rural community.

It seemed so easy, it took so little time and those abilities were back. It made me want to remember what else I have really learned in the past, perhaps long forgotten, that I could bring into service now. And somehow reapply – my guess is that trumpet playing and bass fishing might be hard to integrate into my current line of work. Although if one of my goals was to meet some new people in my local area, and perhaps work more at the community level, I can assure you that I never thought of joining the fanfare (local village bands notorious in Switzerland for playing long sets after speeches at national celebrations, and before the drinking starts.) But maybe I should.

And I’m sure that I could come up with multiple parallels between bass fishing and leadership learning if I tried, it might make for some good learning anecdotes – at least for me.

Followon TwitterSubscribeto RSS Feed
Venue Checklist: What You Want to Know Before You GoCross-Cultural Collision Caused by One Word
Scroll to top