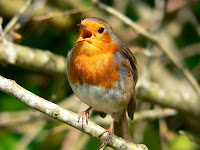 Many people do not see the point of Twitter. I know this because I counted myself as a proud member of this large, non-plussed group until a few days ago. We had followed the hype and set up an account, followed some people (quickly stopped following some people), Tweeted a few times to see how it worked, and then thought, “so what?” Nobody tweeted back to me, most of my “followers” didn’t know me, and it felt a little silly to be sending these cheeps out alone.

Using Twitter in a conference setting however completely changed my mind about its utility and possible applications for learning.

The Online Educa Conference was full of Tweeters. I know that because I spent a lot of time looking at the hashtag that was set up by the conference organizers (smart, they printed it in the front of the Conference Programme Catalogue in “Important Practical Information”.) A hash tag – like #oeb2009 – is a tag that people include in their 140 character Tweets that is searchable on Twitter. If you put the hash tag in the search box on your home page, any post that includes it will come up in an aggregator window on Twitter. So you can keep track of the whole conversation happening in real time, even if you are not following the individual people Tweeting (yet).

Believe it or not, a big conference was a great place to be totally immersed in Twitter as it had so many useful applications at the event. Here is what I was noticing about how people were using Twitter for social learning in this setting (remember there were some 2000+ people attending).

Overall, I was impressed by how much Twitter added to my conference-going experience. It took me a while to get into it. I needed to install Tweetdeck on my I-phone before it got really easy to use it for all the things above. It took me some time to find my “voice”, make some personal policies about what, when and how I would engage with the community through Twitter. And suddenly, I wasn’t learning alone anymore.