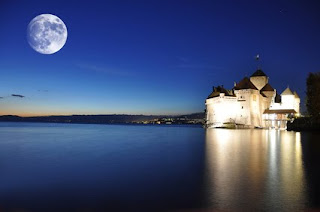 Tonight I went to a network meeting at 2, place du Chateau in Nyon. I had made plans at 20:30 to see Lizzie (my co-blogger) afterwards and was a little stressed when at 21:15 the speaker asked the group if he could go over by another 15 minutes. I surreptitiously texted Lizzie under my chair to see if this delay was going to be ok. When we finally gave the speaker his well-deserved round of applause, I ran down the steps out into the courtyard and hustled towards the lift to the car park.

As I dug around for my keys down the dark pathway, I passed an older couple walking. As I got closer, the woman quietly said to her companion in English, “Look. Isn’t that beautiful.”

Because it was English, and perhaps the tone of her voice, it made me pause and look up.

I stopped. What was in front of me was panoramic. And absolutely breath-taking.

An enormous full moon broke the clouds with broad bright bands that crossed the full span of Lake Geneva, from the far shore of France’s sharp outlines of the Alps, to where I was standing on the cobblestone pathway in front of the Chateau of Nyon. I was so surprised at this I gaped for a moment. I took out my phone to take a picture that would never, ever, do it justice. Then I walked slowly to the elevator to go down the three floors into the car park. At that point the couple had caught up with me.

As the door to the lift opened I turned to them and said, “Thank you so much for saying that. I would never have noticed.” They were surprised and responded, “You sound like you’re from the States.” I told them I was, indeed, from Ohio. And they asked me if I lived here. I confirmed that with a gesture towards the next small village along the lake.

And the kicker is, I had just spent a full 2 hours at a meeting of the Swiss branch of the International Coaching Federation about Coaching Presence – smugly practicing the ability to be fully conscious, being present, slowing down and connecting with the moment and what’s around you. And then I walked out into the most beautiful night scene and I didn’t even notice it! I was simply shocked. How else can I be practicing presence? For heaven’s sake, what else am I missing? What a powerful intervention those two tourists made.

Followon TwitterSubscribeto RSS Feed
Life Lessons: What Dinner Conversations Can Produce (When you dine with systems... If I Was a Word Cloud: Creating Your Visual Biography
Scroll to top