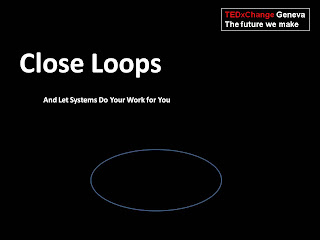 I was very honoured tonight to be able to speak after Melinda French Gates, Graca Machel, Hans Rosling, and Mechai Viravaidya at the TEDxChange event, hosted by the Gates Foundation. Well, this is technically true, although I was speaking on the TEDxGeneva local stage, which followed directly after the simulcast of the New York event.

Lizzie, representing tonight the Hub in Geneva, curated the event brilliantly. It started with the simulcast, a break and then four local speakers including Dr Robert Newman, a pediatrician at World Health Organization and Director of the Global Malaria Programme, Cheryl Hicks an independent business advisor in Geneva who spoke about the power of networks using CSR Geneva as an example, Patrick Keenan – one of the co-founders of the Movement, and me.

I spoke about the power of systems thinking to help social change agents be even more powerful. How can we use the systems around us, close up feedback loops, and get systems to “do our work for us”? During my short talk (10 minutes!) I adapted a demonstration game called Living Loops, from the Systems Thinking Playbook. I used the game to demonstrate the difference between relationships that are linear and take an enormous amount of effort to change, and between systems that have feedback loops that are self-sustaining and can help you reach your goals.

The game helped me tell the story of my brother-in-law, who is working in Mutale in the Northeast of South Africa, and his community’s efforts to start, among other things, a tomato growing business for income generation. When childcare issues threaten to challenge the sufficient engagement of the local labour force to make the business work (many families are run by a single head of household due to absentee parents working in the nearby mines), connecting the profits of the tomato business with creche management and maintenance helps to make this initiative self-sustaining – it satisfies the community’s desire for income and parent’s desire for secure and quality childcare while they work. We played the game demo using a tomato picked from my garden instead of a ball.

After hours of preparation, it’s over now – whew! I enjoyed speaking at the TEDx event, although the quality of all the TEDTalks are so high, that it was extremely nerve wracking to prepare for and then to walk on that stage in front of 100+ people at the University centre in Geneva. We had one of 82 of the parallel TEDxChange events globally, all focused on the 10th anniversary of the Millennium Development Goals and The Future We Make. Big topic, big event, big night – just coming down off of my endorphin rush, and happy I did it!