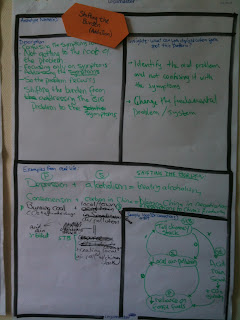 This year I have been working with LEAD Europe (Leadership for Environment and Development) to integrate systems thinking effectively into the leadership curriculum. Last year, I contributed a stand alone module to the LEAD Training (Using Systems Thinking: How to Go from 140 PowerPoint Slides to 2), and think that this year’s more integrated and incremental approach is much more effective, not least because with case-based training you have real content to use as examples and group work.

This year, in the first of the two LEAD Europe week-long training sessions, I introduced the overall concept of systems thinking, and two diagramming tools – Behaviour Over Time Graphs (or Reference Mode Diagrams), and Causal Loop Diagrams (or Feedback Loops). And we used lots of systems games to illustrate the points, I even created a new one called the Flash Mob Game.

The second LEAD Europe session just finished in Brussels earlier this month, and during that week the systems learning focused on Systems Archetypes. This is the first time I have gotten that far with systems thinking learning with a group, usually I only have time to get through the diagramming tools, so it was learning for me too!

10 Systems Archetypes and Where to Learn More

There are some very good resources about systems archetypes. I really like this paper by William Braun titled, The Systems Archetypes,  and the online resource Archetypes: Interaction Structures of the Universe by Gene Bellinger to list two.  These ended up being good references for the work that groups would be doing on this topic.

I could not imagine anything harder to understand and do something with, than me standing up for 1 hours and giving a lecture about the most common systems archetypes. According to Braun and Bellinger they include (sometimes the names differ slightly):

1. Limits to Growth (Limits to Success)
2. Shifting the Burden
3. Drifting or Eroding Goals
4. Success to the Successful
5. Escalation
6. Fixes that Fail
7. Growth and Underinvestment
8. Tragedy of the Commons
9. Accidental Adversaries
10. Attractiveness Principle

These names are intriguing, seem simple enough, although not completely self-explanatory. Still, using an hour of time to go through them, their generic structures, examples, and the insights thay they give sounded too passive and abstract to be useful to the learners.

Over the time I had worked with this interesting cross-sectoral group of LEAD Associates, I had seen them to be real self-starters, and still maintaining a helpful stance towards one another. We had worked hard to create a collaborative co-learning space in this programme (rather than a competitive environment). So instead of “teaching” on this issue, I decided to support them as they made these archetypes meaningful for themselves. I started by giving a brief high level overview (e.g. what are they and why they can be helpful). To reinforce the message about paradigms, mental models and habits -which may hinder you from seeing the systems around you – I used 3 short systems thinking, experiential learning games (Colour/Flower/Furniture: See post How Deep Are Your Neural Pathways?), Pens, and Arms Crossed (watch Dennis Meadows run this game in the video Change is Difficult.

Then I put people in six randomly assigned (e.g. pick a card) groups, gave them some background resources, a flipchart template to fill in (see above photo), and had them pick a slip of paper with one of 6 of the archetypes written on it out of a hat. The groups were then given 45 minutes to create their own description of the archetype, give some examples of where they have seen these patterns in real life (including the context of the full-day simulation that we would be conducting on Day 4 of the training), give some insights about what one can do when you spot this particular pattern or archetype, and finally draw a Causal Loop Diagram that illustrates the concept. Each group then picked the name of an archetype out of my hat and that was their archetype for this exercise. They went outside and went to work.

What ensued was really peer learning and team learning: They used the handout resources, explored understanding, corrected any language or comprehension mis-matches, and told stories as examples from their own experience as well as from the case study of this module (the EU carbon emission targets) which was also the basis for the simulation.

When they returned to the plenary, they presented their archetypes and then answered questions/comments from the group, their peers.

When we started, no one had any experience with systems archetypes. However, by the end of this session (2.5 hours) they had a very deep understanding of one (and how it worked, and where it could be useful), and a good understanding of the others, as they listened and talked to their different peers presenting the explanations. For them, I am convinced that this was much better than sitting in chairs and listening to me talk and show them slides of 10 of the most common archetypes. In this scenario, they would not have had the practice identifying and using them.

When I designed this session – self-taught systems archetypes – I wondered if it would work. I was pleased that it worked so well – the examples were excellent, the whole thing was personalized, and I could simply intervene to add stories or correct things, as needed. I had time to help groups that might have been stuck, and question them in ways that would get them to think about the issues at a different level.

To reinforce this learning later in the week, I offered a prize for anyone who used or referred to a systems archetype within the context of the simulation. Interestingly, I found many examples of how systems and the archetypes were being used. As a reminder of our archetypes, we kept all the flipchart explanations/diagrams in the room for the rest of the week.

I could have made up a job aid that described in that way all the archetypes, and simply presented it. But this way, the self-taught approach – with participants making their own set of personalized “job aids” for future use – turned out to be an extremely effective way to transfer messages and learning about systems archetypes.