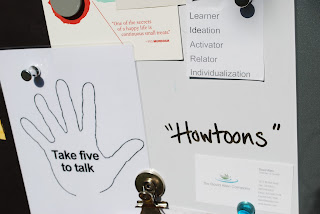 I’ve had the word “Howtoons” written on my bulletin board for several years.

For me, the word has become emblematic for mashing things (anything) – combining, mixing, using them in ways you might not have thought about before – to make something new and even more useful. And there are blissfully no rules to this.

In the case of Howtoons it is using cartoons and comics to help people learn how to do things (versus pure storytelling and entertainment alone).

I love the word “Howtoons” for what it reminds me to do. It’s almost a one-word checklist for:

And when I googled “Howtoons” just now, I was even more delighted with some of the sites that use this moniker.

At the Instructables website, they call Howtoons “weapons of mass construction” and show in comic strip format how to make everything from a Marshmallow Shooter to a Turkey Baster Flute. They say they use OpenKidsWare much like MIT uses OpenCourseWare for wider distribution.

The Howtoons website itself is more of a one-pane cartoon, very sophisticated and embedded with what makes great comics, where they manage with this format to explain how to make their alka-seltzer powered rocket and spring loaded chopsticks. They also explain that Howtoons are what you get when you take a comic book artist, an inventor and a toy designer and put them together. Another successful mash-up!

Ever in search of innovative ways to help people learn, I have been delighted with what I have heard in the last year about the “Maker” movement (not as in True Blood) and tinkering, as ways to bring innovation and creativity to learning. These were both featured at the DML (Digital Media and Learning) Conference earlier this year – they even had on their Conference Committee a “Making, Tinkering and Remixing Chair” – Mitch Resnick.

In the Design Tinkering workshop, each table had the same pack of materials and some instructions. Two tables each had the same instructions -e.g. there were two sets of instructions – one was prescriptive about what to do with the materials, the other said (as below) “build and explore as much as you can about the materials provided”. We tinkered, and it was great fun re-purposing familiar materials into new things (the “thing” we made below lights up, not sure how useful it is otherwise, but we enjoyed our work)! 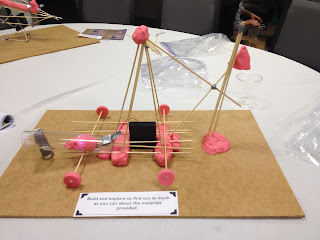 At TEDGlobal this year, we were also treated to talks on tinkering and making, with an interesting one by the co-founder of Arduino, Massimo Banzi. Arduino makes the cheap open-source microcontroller, a small programmable computer that has launched a thousand projects (like the DIY kit that sends a Tweet when your beloved houseplant needs watering.)

Another TEDGlobal speaker, Ellen Jorgensen, talked about her do-it-yourself biotechnology lab where you can walk-in and do biotech research in a community lab like GenSpace (where you can “hang out, do science and eat pizza.”) TEDGlobal itself even had its own MakerSpace where you could do your own DNA extractions, among other things. I wrote about my bio-molecular self-assembly experience in TEDGlobal2012: What’s Going On Right Now?

I will keep that word “Howtoons” right in front of me on my white board. For inspiration, and to prompt me to combine, recombine, mix and mash my learning tools with each other or even very different things – whether its cartoons and how-to advice or others (and I’m sure I can think of a way to use that Turkey Baster Flute in my work…some how…)

Followon TwitterSubscribeto RSS Feed
Why We’re Using Ignites in our Conference WorkshopLearning to Use Evernote: Two Examples from a Learning Practitioner
Scroll to top