Vance Stevens, of the Petroleum Institute (Abu Dhabi) and founder of Webheads in 1998, gave a two hour Un-Workshop this morning at our Arab Region New Learning for Sustainable Development Workshop that he titled F.U.N. * Fair: Computer Mediated Communications Tools for Distributed Social Learning Networks. This was a face-to-face un-workshop, a veritable souk of activity, connectivity and interaction both in our training room at the Library of Alexandria, where we are now in Egypt, and with his online colleagues from Barcelona, the West Coast of the US, and so on, who joined us in Second Life, on skype and on worldbridges.net.

The Un-workshop had an open door policy, people were popping in and out. Laptops and terminals all on different pages, the clattering of keypads, exploring and trying out the URLs that Vance was introducing to us, talking us through, answering ten questions simultaneously. There were plenty of technical challenges, and at the same time lots of patient people who were excited by the possibilities, mystified by Second Life (one Egyptian participant said it should be called “Second Wife” instead), and eagerly starting their journey in the technology-mediated environment. It was great to have Vance as a guide. What you can learn from seeing it, trying it, and being able to query it in real time is so valuable, plus his enthusiasm is catching. You could tell that we weren’t the only ones having F.U.N.*

During his very interesting presentation (which I will blog more about later), he introduced a tag for our meeting IUCNALEX, which we will be using together to aggregate our comments and reflections.

In the presentation this morning by the Taking IT Global team they introduced the idea of “curiosity-based” learning. I think we have a rich mixture of participants here with us, some who are active bloggers and Web 2.0 enthusiasts, and some for whom many of these tools are new. So we can use our curiosity to experiment with some of these, use the resources and knowledge of our colleagues to promote further learning on these tools and the opportunities that they provide, and the tagging system will help people keep it all organized. I hear that Buthaina al Othman, who is one of our speakers this afternoon, talked another participant through how to set up a blog already, so we might have some new bloggers coming out of our meeting!

We have been talking about standards for social impact analysis today in a small discussion group. Has anyone thought of an ISO like this yet? That would be really helpful to those who are organizing workshops and for speakers as well.

No matter how hard you try to have a dynamic, interactive feeling to a workshop, if you are in a room where the furniture is all facing forward and bolted to the floor, people’s assumptions are that they are there to sit still and listen, and not to look at each other and talk.

We have just launched our New Learning workshop, our room is a banked auditorium – very nice, very wired, not too big and very quiet at the moment. Of course, we are at the introduction and context setting part filled with short presentations. And we will get to work hard to change the dynamic once we move past this part to participants’ introductions, which I will facilitate next. Needless to say, I was delighted to notice that the chairs do swivel.

We hear a lot about the digital divide between northern and southern countries, but we know deep down that the real digital divide lays somewhere in that fuzzy expanse between 18 and 40 years of age. Somewhere between those who were born digital and who are discovering digital.

In the last few days in Egypt we learned more about this. Yesterday we heard a great story from Ahmed, a teenage undergraduate student at the School of Engineering in the University of Alexandria. Ahmed and some of his friends had recently engaged one of their professors in a little experiment.

In a course on the combustion engine, the students had finally had enough of their professor lecturing them on how the engine works. He did this by drawing the parts on a white board and explaining how the various parts worked to them. Drawing took a long time, was nowhere near to scale and, most problematically, did not move. The professor simply drew arrows to indicate how the engine worked or acted it out himself (no doubt with high amusement factor).

Ahmed asked his professor one day if he could have his notes and try to represent the lecture in a different way. After initial resistance, the professor handed over the notes. With the help of one of his friends, Ahmed learned Flash and animated the whole lecture. The professor was delighted as it saved him time, was accurate, and the other students loved it. Ahmed also put it online for sharing with professors, and students in other classes and engineering schools (still patiently working with engines drawn on whiteboards) could benefit from it too.

Being on the “wrong” (forty plus) side of the digital divide can be a humbling experience. At the same time, it does serve the nobler purpose of leveling the playing field and opening it up for more intergenerational co-learning opportunities which present a win/win for both professor and student. Having converted the lecture of the professor into animation, Ahmed himself gained a much better understanding of the workings of the combustion engine. Having accepted the possibility that his learners (students) may have something to teach him, the professor has also learned how new technologies can enhance his work.

If this heralds a paradigm shift, what will our universities look like in the future – will we all be learning together? 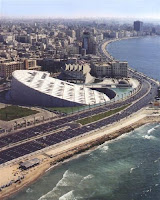 Lizzie and I are here at the Bibliotheca Alexandrina (Library of Alexandria), in Egypt with our colleague Rania, who works in our Amman office. We are here planning a workshop on new learning (formal and informal) for sustainable development in the Arab region this September. We are going to be inviting some Universities who are developing and delivering e-learning courses in the region (on our topic of environment and development) and will also be inviting people who are using informal learning tools (like blogs, wikis, podcasts, etc.) to foster learning on this topic in the region.

We were delighted to hear today about how the library is a great forum, source of inspiration and an experimentation space. The senior staff member that we spoke to told us that it was “born digital” and as a result is encouraging students to help their professors enter the internet age, from offering to put their lecture notes into PowerPoint to engaging them in internet-based chats, and more. The learners are helping their teachers to help them learn. We are interested to know how Web 2.0 is supporting these efforts to enhance learning across the board in this region.

Rania told us this morning about a Jordanian blogger who is writing about environment and development news in the region. This blogger says that, “Blogging has became a highly effective and free expression medium that is spreading all over the Arab world. Amongst thousands of blogs in the Arab World very little focus can be found on environmental issues. ” We have already found some bloggers who are talking about this topic, like him. That is however just one part of our search…

Does anyone know any Arab region bloggers who are writing about formal and informal learning? We would be happy to know about them too!