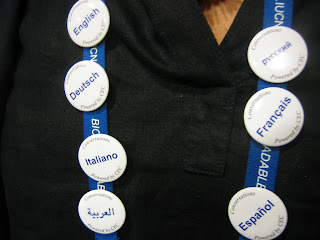 Imagine you are at a huge international conference. How can you get over 8,000 people from 178 countries who have so much in common, but don’t know anyone, to engage in conversations and meet each other? At mega-events like this, people pass by each other in droves in the hallways of the conference centre, pack into elevators or escalators on their way to the next event, and stand in long slow queues to buy their coffee. But with the exciting diversity of languages represented at a conference like this comes the inevitable and rather awkward entry question of “Do you speak English”? (or “Parlez-vous Francais?”, or dozens of other possible language variations). To deal with this quandry, our Learning and Leadership unit, partnering with the Commission on Education and Communication, introduced an innovation at our organization’s recent World Conservation Congress: language buttons.

Well, we decided that one way to get people to appoach each other was to advertise the languages they speak, so that the Do-you-speak-X question would not be a barrier to engagement. We made thousands of buttons with 20 major languages printed on them in their own alphabets AND we made a blank button. On the blank button, people wrote other languages (such as Nepali and Afrikaans), and dialects (like Kreol and Bavarian) and even in one case a rather key coordinating person coyly wrote, “Don’t even think of talking to me” (but I don’t think he ever wore it).

In this process, we learned new things about colleagues – our Australian Director spoke Nepali (he had worked in a field office there), a Canadian colleague spoke Chinese for the same reason, our American Chief Scientist was fluent in Thai. These buttons were conversation starters even among people who knew each other. That was a huge benefit, not to mention sharing the incredible pride that people felt when they put them on (like my colleague Nicole in the photo above who sported 7!)

The buttons were a hit! The Information Booth workers had them, the Registration people had them, the Commission on Education and Communication members had them, and many, many more. These big conferences can be so impersonal, yet are attended by people who have the most to gain, exchange and learn from great conversations with each other. The question we asked was,” What can we do to get people talking together?” One small answer, only 30mm across, turned out to be a big success.