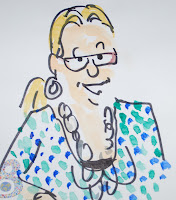 Many of us go to hours, days, even weeks of meetings and workshops as a part of our working life. Then when we return home have the added pleasure of trying to remember what happened and what we agreed to do.

Thankfully many of us also have developed good systems for tracking our next actions (I’m happy with my GTD practice, which 2 years after adopting is still going strong), and of course we also rely on the organizers to send out a report which further reminds us what happened and what’s next. These reports take many forms, and a good one is one that we a) actually read, that b) keeps the interest/excitement/momentum of the hours/days everyone spent together, and c) encourges follow-up on our part.

With the flurry of meetings and workshops that most people experience as part of their work process, how can you make your own event memorable? What can you add during and after the event that makes it stand out and finds a little home in the grey matter of each participant for the duration of your collaborative work?

Helping people remember is something that can be built into a workshop process. Like the deliberate process of creating a story from an experience – it helps people to organize and contextualise information, distill its meaning, reorganize it into a lean narrative, and create a product (story) with title or tag that is easier to remember and reuse later.

You can of course, literally, ask people to create stories from their experiences at the end of a workshop, and practice telling each other these stories and notice the great ones (people can always share and use each other’s stories). You can also use techniques like some we saw at the Society for Organizational Learning conference last year, which had “Weavers” (two charismatic people who opened and closed each day, Sonny and Cher style), who effectively linked or wove together what was going on in the conference into funny stories and jokes -again contextualising the information and applying it to real life in a humorous way. They created and told the stories for us in that case.

That conference also had a Slam Poet duo – Tim Merry and Marc Durkee – who by the end of each day had written a rap-like song, with guitar accompaniement, which pulled out a few of the strongest points from the day’s plenary presentations and built them into a strong refrain. To get big messages to stick, they even had a sing-along component. You can’t get much more memorable than that (600 people singing along to the key messages over and over again).

Visual facilitation and graphic recording are two practices that also help to create icons and memory triggers for participants, not to mention helping information and data creep over from our rational left to the creative right side of the brain (more brain real estate cannot be bad). The image above (of me!) was created in a recent workshop by Fiami, a Geneva-based graphic recorder and visual facilitator, who worked at the back of our room to capture the essence of the discussion in one pane images which are informed by his work in “bandes-dessinees” (which translates (poorly) into comic strips). His work creating one frame images with captions is slightly different than the main-stream graphic interpretations by visual facilitation groups such as Bigger Picture, a Danish group with which we have also had the pleasure to work.

Bigger Picture, like many of the visual facilitators who work in the tradition of David Sibbet and The Grove (often credited with first bringing strong visuals into planning and strategy processes), capture the process in murals which visually track the progress, decision, discussions of the group in real time. With this approach, at the end of the workshop, you have a large graphic artifact (literally meters of interconnected drawing) which ultimately can be reproduced as a poster for each participant if you have the budget (they are not cheap). These mural creation processes, which do go on quietly at the back of the room during your meeting, have the most impact if some time is built into the agenda for participants to interact with the visual – validate it, add their own post-its of icons and meaningful words here and there, and reflect on some of the key messages. With these visual “fingerprints” of participants embedded within it, the final visual’s utility as an aide memoire is greatly enhanced.

The number of groups around the world working in visual facilitation is growing. Many of these practitioners are connected through networks like the International Forum of Visual Facilitators and vizthink which operate globally, the latter of which includes all kinds of applied visual techniques.

Whatever you do (come up with your own!) you can increase your chances of success, longevity of ideas, and active follow-up to your workshop by being more memorable for participants. It might feel a bit risky at first, but my experience has been that participants are most thankful for the extra help making their time spent with you in the workshop more actionable.