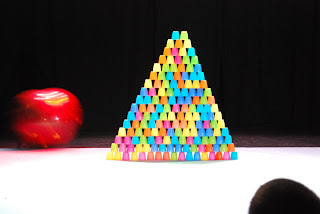 Every town should have a local circus school, if only to remind us that there are at least 10 ways to do anything. It’s not just because I am a proud parent to two jugglers that I enjoy the regular circus shows. It’s because creativity literally oozes out from under the doors of the place.
Today’s show featured some 50 young circus students; and one of the challenges they clearly set themselves was how many different ways they could get them on and off the stage. Sure, they could have just walked on and performed their acts. But they didn’t. They hopped on in burlap sacks, they somersaulted on in pairs (not easy, but possible), they walked on using colourful plastic cups as “binoculars” to peer at the audience, they rolled in on giant balls, they stepped in whispering mischievously to each other, they walked in on ropes that they were laying down in front of themselves as they went. And on and on.
They also used those methods to leave the stage, walking back on their rope, picking it up behind them as they went, always cleverly tying in the juggling, acrobacy, or high bar that they performed into their means of “transport” on and off the stage.
I asked one of the teachers how they came up with all their ideas. She said simply that they get together and ask themselves the question – what are all the different ways we can do this? Then they have a lot of laughs and come up with the most amazing stuff, always keeping it very simple. Those plastic drinking cups were “binoculars”, they were lined up as a colourful border at the back, then a border at the front of the stage between us and them, they were piled up into the most perilous tower (several times) in the middle of the stage, and then knocked unceremoniously over by a giant ball, and at the end the young performers toasted each other with them.

Sometimes it’s as easy as that, get some people together and ask the question – what are 10 different ways we can do this (get people on stage – or do our brainstorming, design this project, run this meeting, celebrate this achievement)?  For inspiration look anywhere, find some friends, and don’t forget to ask the question.