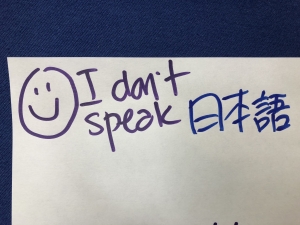 As trainers and facilitators, we need not necessarily be confined to working in our native languages. We have probably all had experiences working with translators (who translate the written word) for materials and interpreters (who translate the spoken word) in meetings using both simultaneous and sequential interpretation. But normally these opportunities are confined to more formal presentations and settings, where people are sitting down with headsets bolted to tables or connected to a little fiddly box, and often to shorter timeframes.

What if you wanted to play a game, run a quiz, or get people on their feet for an interactive exercise, in Russian, Arabic or Japanese? (these are languages that at least I do not even notionally speak)

With our Japanese partner, Change Agent Inc., and a fantastic, local bilingual Co-Facilitator, I had the great pleasure recently to lead three days of Bright Green Learning Academy workshops in Tokyo with an impressive group of 30 Japanese Facilitators and Trainers. Our training courses are highly interactive and experiential, and it was a training about facilitation and working across cultures.  It was fascinating to plan how to run the workshops very effectively in a language that the lead trainer (me) didn’t speak at all. It worked remarkably well due to a number of actions taken in advance and during the workshops. Bear in mind that to do this well, it takes a lot of extra work, but if your goal is real learning exchange, then it’s worth it.

To make this work, preparation is absolutely key. You cannot simply show up, speak your language, and let the interpreters do all the work, using your English slides, flipcharts, and materials. Everything needs to be translated in advance, including: 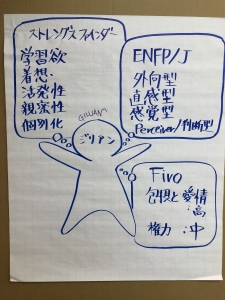 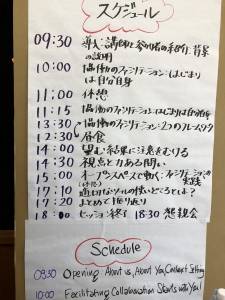 Note that it takes longer than you think to translate all these materials well, and format them nicely (and in some cases print them). All these materials need to be sent weeks and months in advance if possible. It is also important to have a professional translators, which Change Agent had, so that the translations were done particularly well, something always appreciated by participants.

With all your materials translated, and with a mirror English set in your hands, you are ready to start working with the interpreters. On the day prior to the workshop, it is useful to set up a meeting with the interpretation team so that they have a chance to ask you questions.  The excellent Japanese interpreters I worked with had been provided with both the English and Japanese translation of the materials and had carefully gone through it highlighting concepts, acronyms, phrases that they needed some further information about. This meeting took us about an hour, and also included their tips for me on how to work successfully with them.

In our case, as we were a relatively small group, in a small room, I was the only person with a headset. When I spoke, the interpreters would consecutively translate into Japanese. So I needed to speak slowly and chunk up my inputs so that they could follow. When a Japanese participant spoke, or my co-facilitator, the interpreters would simultaneously translate into my ear. So for the participants, when they were interacting with each other and with me this was seamless, and almost immediately I could understand what they were saying. In order to do this, the interpreters would move around the room to be close to the speaker and use a small whisper mic into which they would simultaneously interpret into English what was being said. They used a clipboard to cover their mouths when they spoke into their small hand held microphone (about the size of an iPhone) and could do it so quietly that no one noticed or heard them speaking, except me through my ear piece! This meant that when I spoke, it doubled the time needed, but when participants were speaking, there was no additional time needed in the agenda. That was an incentive for me to keep my inputs concise, and pacing felt more natural.

With a highly interactive agenda, including lots of movement and format changes (we were delivering facilitation training so walking the talk) this worked well, as participants did not need to speak into microphones, nor wear headsets. I also did not need a microphone, as long as the interpreters could hear me clearly. They did use a microphone themselves when they were consecutively translating my words, so that they could be heard easily by all the participants in the room.

A couple of tips from the notes that I made during our workshop:

All in all, it is amazing to be able to work effectively in many different languages, even if you don’t speak them. Taking particular care of the preparation and delivery with translation and interpreters can help you make sure that you achieve your goals, your participants achieve their goals, and that your words and materials are not irretrievably lost in translation!

Followon TwitterSubscribeto RSS Feed
8 Plenary Welcome Addresses? What Else Can You Offer VIPs During Your Conference...

What to do BEFORE you get robbed…A traveller’s checklist you will...
Scroll to top