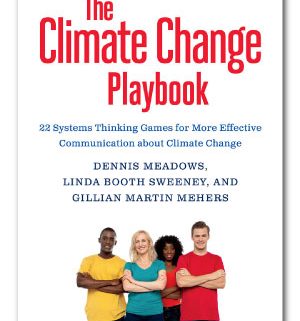 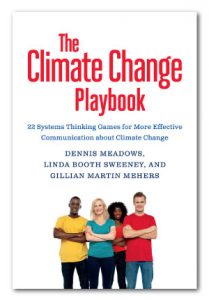 This post is generally translating “serious games” (games with learning messages) that we normally play in face-to-face settings into versions that can be played in a Zoom or other online evironment. Here I am writing specifically about games in the Systems Thinking Playbook and the Climate Change Playbook, the latter of which I wrote with two co-authors Dennis Meadows and Linda Booth Sweeney.

Recently I attended an online seminar, hosted by the Systems Dynamics Society and Linda, about how to use Playbook games online. These books are great resources for face-to-face workshops, but in Covid times these are virtually non-exoistent. As we all move online, Linda shared how she is using some of the games in virtual environments. We played Arms Crossed, Circles in the Air, and Paper Tear and they mapped over easily and effectively. It got me thinking about how to translate some of the longer and more complex games into Zoom workshops. I fully believe that every game can somehow have a virtual counterpart, with some creativity! Three of my favorite games are Triangles, Speed Catch, and Thumbwrestling. In this blog post I will write about Triangles. In subsequent posts I will tackle Speed Catch and Thumbwrestling.

In the Climate Change Playbook, we divide the 22 games into three categories: Mass games, Demonstration games and Participation games. Mass games are those that can be played by very large groups of participants, for example in conferences or during presentations or lectures. People can be seated in theatre style or around tables and everyone plays.

These Mass games translate rather easily into virtual environments as there is a game leader who provides instructions and people follow these. Examples from the books are Circles in the Air, Arms Crossed and Frames. These games are played by individuals, although there can be some that benefit additionally from group play for deriving lessons, like 1,2,3 Go! or Paper Tear.

With Demonstration games, you can get a lot out of them by simply watching – if you have a small group then everyone can play, but if you have a large group then a subset of the group can play and others can watch and learning can come from either role (player or observer). For many of these kinds of games, you can use videos that are already online to show people parts of the game, stop the video, ask some questions, and then go on. Thumbwrestling is one of these. We call it a Mass game in the book because you can do it in an audience by playing with someone next to you, but because on Zoom you don’t have anyone next to you, I will move it to this category for now.

For Participation games, these can be played by larger groups (up to 30 we say) but learning really comes from participation, and “observation only” provides less value to participants. Triangles and Speed Catch are examples of Participation Games.

The games I want to makeover fall into the Demonstration and Participation game categories.

Virtual workshops and meetings tend to be shorter. People are regularly compressing 1.5 day workshops into a 2-3 hours session. As a result, it might be tempting to reduce the games and skip the debriefing. However, debriefing is the MOST important part of the game. The game mechanics show a dynamic that you then learn from through reflection and discussion. So it is really important to preserve the time after the game for the debriefing discussion. During our Systems Dynamics Society workshop we used Zoom breakouts to debrief the Paper Tear game in smaller groups of 3-4 so that everyone could talk (we were around 115 people). If your group is small to begin with, then this could be done in plenary. The key is that you use your powerful debriefing questions to do some mining of the game experience for the key messages and lessons you are trying to surface.

If you are doing a Mass game, for example, that depends on your demonstrating something (asking people to draw a circle on the ceiling, or cross their arms, etc.) you need to consider your own environment, camera angle, your distance from your video camera, etc. so that people can effectively see and hear what you are doing. As such, you need to test this, with your camera on, in advance so that you can see what other’s are seeing. You need to make sure you are not crossing your arms too low and out of the camera view (Arms Crossed), or that you are not too close to your camera for people to see your arm making a gesture towards the ceiling, that you want others to make (Circles in the Air).

Consider also that people may be connecting from different devices. Some people might be with you on their mobile phones, or on an ipad, with a smaller screen. As a result, it is important to speak the whole time you are showing people what to do – describe vividly what you are doing, so that even if they cannot see you well, they can still follow you.

Making Over Games to Virtual Environmets

Making “over” games is similar to making them in the first place. You have to think first about the message you want to get across, then think about a dynamic that can do that (with debriefing questions), and then you make the game. It is not always easy to do that, game design is a skill. In translating the following games into a virtual environment, I started by thinking about the games I wanted to redesign in this way.

What follows below is not a complete game description, for that you have the book (hopefully!) but will get you started thinking about how to do this, and maybe give you some ideas of how you can make over some of your own favorite workshop games.

The Triangles game shows, among other things, how interconnected players are and how they form a system. It sets up a system in which you (the game administrator) intervene and can show how a change in one part of the system may or may not impact another part of the system (depending on the rules), and it can show delays in that things may change gradually and unexpectedly and not all at once. It helps explore leverage points – places where you can make large changes (if that is your goal), or no changes to a system (if that is your goal) – illustrating high or low leverage.

In the face-to-face (F2F) version of this game, people initially stand in a circle to set up the game. They select two reference points (people) around the circle and, once the game begins, are instructed to stand equidistant between those two people, making a triangle as needed to maintain equal distance. People move and the system starts to move. People laugh and try to maintain equidistance even when others continue to move and shift. Eventually the system settles and the game administrator can make changes to the system (moving selected individuals) to see how it reacts.   In the F2F version, you can add instructions at the start for people to select some characteristic (“pick someone with glasses as one of your reference points”), or NOT to select another characteristic (someone wearing red). So that you know when you move these people there will be a large change or no change.

How on earth could you do this virtually when people are sitting all over the world behind their computers???

Using a Google Jamboard or Miro or another white board tool on which people can interact. Set up a page in advance (or if people are used to the tool, they can create their own “avatar” post-it) with one post-it for each person. Start in the circle. 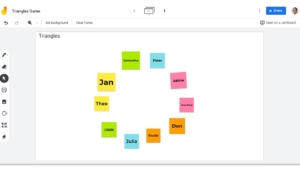 When you set up the Jamboard in advance, you need to change the settings so that everyone with a link can edit. Then you can share the link in the chat window during your workshop, have people click it, and then they are on your Jamboard and can participate, and are still connected with Zoom (for example).  At this point I would ask people to unmute themselves so that you can hear what is going on while people are playing (laughter or frustration) but you need to tell people that they should ideally not talk while playing the game.

Now you can provide the same instructions as in the F2F version, with some modifications. Once the game starts they will move the post-it with their name only when you say “Go”. They first need to pick two reference points (two names on post-its in the circle) and not tell anyone. Once you say “Go” they will need to move the post-it with their name (their “avatar”) so that it is equidistance between their two reference points. You can also add some qualifiers BEFORE people pick – e.g. make sure one of your reference points is orange, and don’t pick one that is yellow. I would say not to “personalise” it too much by using people’s names (same in the 3D version of the game).

When you say “Go” people will start to move their post-it avatars and things will get messy for a while. Then the system will settle probably spread out all over the Jamboard or Miro board. Once it has settled you can reinforce this by saying “STOP” and tell people that you, the game administrator, will intervene and make a change in their system and that they should just let this happen and not move anything. You now make a change (tell the person that you will be moving their post-it) – then move one of the post-its to another part of the Board. Then you ask them to again be equidistance between their two reference points. If you have selected one of the colours that no one has chosen (yellow), then nothing happens. If you choose an orange post-it, then chances are that everyone will have to move again. You can observe delays, where people initially don’t have to move, but eventually their two reference points are affected and they do. The general dynamics of the game should show up as you intervene a couple of times and in different ways. The debriefing can follow the book at this point. What real life behaviours does this exercise remind you of? Where have you seen high or low-influence individuals or policies in your own organization? etc…

Curious? Try it and leave some comments on your experiences.

I have also thought about a way to run Speed Catch and Thumbwrestling which I will write about later, this post is already pretty long!

Followon TwitterSubscribeto RSS Feed
“Have Fun in Japan!” Getting Yourself Ready to Work for 3 Days in...

New to the Zoom Tech Host Role? What to Expect Behind the Scenes (and where...
Scroll to top