Gillian’s recent sharing of TEDx talks reminded me that it was high time we share an excellent talk that couldn’t be more relevant in the lead up to Rio+20 later this month (for which a lead theme is the Green Economy) … not to mention the fact that yesterday was World Environment Day!  If it passed you by unawares, not to worry.  Take a few minutes today to watch this talk and share it widely to do your bit.  The short talk is called “The Economy, It’s Nature’s Business” by Eva Zabey.
Eva asks – How about we use the economy to guard the environment as part of the way we work it? Natural ecosystems provide services not accounted for in today’s economy because they’re not appropriately valued, yet all businesses depend on ecosystems services, even if the extent to which they are aware of this varies greatly. The methodologies are evolving to do the maths necessary to value ecosystem services and make informed decisions. Now, she explains, we have Corporate Ecosystem Valuation tools to smarten our decision-making in business, legislation and policy. “Environment versus the economy is so passé. It’s environment in the economy!”   Watch Eva’s talk now and let us know what you think.
06/06/2012/0 Comments/by Lizzie
https://brightgreenlearning.com/wp-content/uploads/2016/12/download.png 0 0 Lizzie https://brightgreenlearning.com/wp-content/uploads/2016/12/download.png Lizzie2012-06-06 19:12:002016-12-22 15:35:14The Economy, It’s Nature’s Business: TEDxTalk by Eva Zabey

How do you capture the reflections of participants on ideas shared during your event? At the end of the TEDxEcoleHôtelièreLausanne programme, we scheduled the university’s music committee to perform a musical interpretation of the event. We knew that they would need up to ten minutes to get their instruments set up and ready to go on stage. A great opportunity to capture some reflections from participants!

We prepared a slide with three questions on it, and handed each participant three colour-coded cards to match. The questions (see photo): 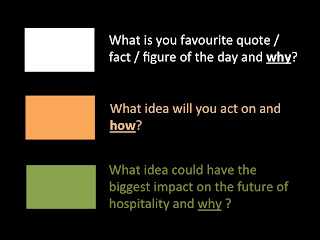 Whilst the band set up, participants discussed these questions with people seated next to them and then wrote their personal response on the cards, which we collected and posted on large boards for everyone to read during the aperitif that followed. The cards generated lots of interest as people learned how differently people experienced the diverse talks. And an important bonus too: it helped them remember things which they may have already begun forgetting in the mash-up of ideas that comes with TEDx events. 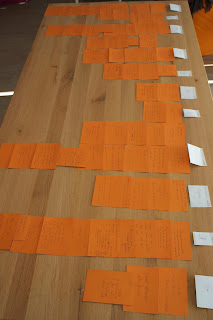 The analysis that we did after the event was also really interesting. We started by sorting the cards according to colour / question, and then regrouped the cards according to the talks they refered to. Laying them out on a table under the speaker’s name immediately gave us a bar graph for each question. We could see which speakers were most quoted, which ideas people will most act on, and which people see as potentially having the biggest impact in the future. And then looking at this data collectively, we could see how these three questions elicited very different responses! There was no apparent correlation between people’s favourite quotes, facts and figures and action or impact. And, perhaps most interestingly, the ideas that were most seen as potentially having the biggest impact were among those that participants were least likely to act on. 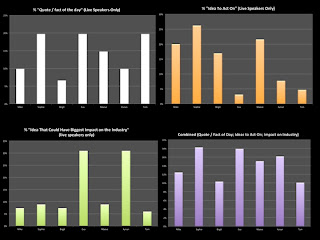 Doing this cards exercise is a quick and easy way to gather a very rich reflection on what people valued about each talk. It also highlights the deficiencies in asking a simple question such as ‘which was your favourite talk’ because how do people respond? With that which hooked them with a great quote? That which they will act on? Or that which could have huge impact in the future? We are looking forward to the results of the online survey to see if we can see a pattern! What is clear already is that all the speakers were valued for one reason or another, and we’re pretty stoked about that 🙂

p.s. It also enabled us to provide some much appreciated feedback to the speakers… an important part of the often-forgotten post-event speaker care!

The first TEDxEcoleHôtelièreLausanne event took place on Monday 16th of January 2012. Here is a summary of the great ideas shared, based on tweaked tweets from the event, to whet your appetite in anticipation of the videos 🙂

How do you cater for customers’ racehorses? Considering the extreme needs of customers uncovers hidden opportunity. Who is your unexpected IT guy in the bushwacker hat 3’000 miles away with THE idea for the business jet of the future? Could a SWAT team of inexperienced, unusual suspects trump your chief engineer? The game-changing innovation may lie less in the performance of your product and more in experience engaging with it. Get prepared for the unexpected, because the unexpected stuff might be the biggest and the best.

From talking of innovation in unexpected places to an innovative, alternative to Styrofoam from an unexpected source…

A single cubic foot of Styrofoam has the same energy content of 1.5litres of petrol… yet it’s thrown in the trash. 20 billion dollars of Styrofoam is produced every year and it occupies 25% of US landfills. Using mushroom mycelium as glue, mold things from agricultural byproducts – replacing Styrofoam cups and packaging!

From mycelium-based packaging to an insightful look at packaging design…

Should we be packaging food that already has the best kind of natural packaging? Children don’t connect what they eat and where it came from – exacerbated by how we package and deliver food. Rather than hero food & all it’s wonders, software-led packaging design created barriers, misrepresentation & bad habits. Quoting Michael Pollen: we shouldn’t eat anything that our grandmother would not recognize as food. Understanding our food should be instinctual, offering direct ways of reconnecting with, and understanding what we eat. The future of taste: a greater appreciation of our food’s virtues & possibilities, clearly communicated and experienced.

Annual sugar production is 160 million tons/year. This is equal to the quantity of sand needed to build the Dubai Palm Island and requires 240 Trillion litres of water – as much as 3 times the Lake Geneva – to produce. Luckily we are not made of sugar and food is much more than calories: The value of food, the energy it gives us, is to a major extent driven by pleasure! Energy = Calories x Pleasure to the power of 2. Understanding the science of senses and flavour helps increase pleasure and energy from food and protects our health and planet.

From flavour science to the links between flavour, farming and feeds…

TEDTalk Video: Dan Barber – “How I Fell In Love with a Fish”

Questioning a scientist from a fish farm: “Don – what are some e.g.s of sustainable proteins?” The answer: chicken scraps. “After that conversation the fish tasted like chicken”. But, at the feed-free Veta La Palma fish farm in Spain, pink-bellied feasting flamingoes signal the health of the system. To feed ourselves in the future, let’s look to the ecological model, and to farms that farm extensively & restore. “Farmers that are experts in relationships are experts in flavour too and… a better chef than I’ll ever be.”

From an ecological farming model to the ecosystem services mathematics…

How about we use the economy to guard the environment as part of the way we work it? Natural ecosystems provide services not accounted for in today’s economy because they’re not appropriately valued. ALL businesses depend on ecosystems services, even if the extent to which they are aware of this varies greatly. The methodologies are evolving to do the maths necessary to value ecosystem services and make informed decisions. We now have Corporate Ecosystem Valuation tools to smarten our decision-making in business, legislation and policy. Environment versus the economy is so passé. It’s environment in the economy!

From ecosystems to a highline wildscape proving valuable to Manhattan…

TEDTalk Video: Robert Hammond – “Building a Park in the Sky”

Inspired by 1.5 miles of wildflowers running through mid Manhattan on an elevated rail line, a park was born. Friends of The Highline saved it from destruction by creating a wildscape park. It cost $250 Million. Now people estimate the Highline park has / will create about half a billion dollars in tax revenues for the city. “It’s in the people and how they use it (the Highline park) that, to me, makes it so special. Public space has the power to transform how people experience their city and interact with each other.”

Thinking like a novelist can open up new ways of pursuing innovation in any number of career paths. Creating a fictional space for a story is not far removed from the process of creating a real space. Readers are tourists. If you want to create something new, to innovate – try starting with a character and write them into story. And as your write your story, remember the novelist’s technique – ‘Show, don’t tell’. Keep on remembering this as you take off your novelist’s hat and create your new product or hospitable space.

From creative writing to creating interactive and influential spaces…

Since early humans we’ve created spaces partitioning us away from a biosphere of highly active & interactive space. In 1923 Le Corbusier said “A house is a machine for living in”. In 1969, B.F. Skinner said machines think (B.F. Skinner 1969). Together these suggest that buildings think. The sort of tracking we are aware of & used to online is now pervading our physical environments. The spaces we create are increasingly interactive and intelligent. They can even be conditioned to learn to influence us.

From interactive spaces to the world of gaming…

Game playing gives us urgent optimism, believing that an epic win is possible and worth trying. It weaves a tight social fabric. We like people better after we play a game, even if beaten badly. It takes trust to play a game: trust others will spend their time, play by same rules, value same goal, stay until the end. According to Herodotus, dice games were invented in the kingdom of Lydia and used for 18 years of famine escapism on days with no food. Nowadays (quoting economist Ed Castronova) “We’re witnessing a mass exodus to virtual worlds and online game environments”. We need to tap into this mass human resource for good using gaming to change the world. Let the world-changing games begin!

From gaming to another phenomenon of anthropological interest: hospitality and hostility…

Live Speaker: Tom Selwyn – “Being At Home in the World”

Examples from Ibn Batuta, Genesis and Plato’s Symposium show hospitality’s role in occasions where social relationships are symbolized. Hospitality is in a fundamental sense for society itself, marking the making of social / political alliances and transitions. At the same time, hospitality is first cousin to hostility. From earliest times the refugee has always been the most needy of hospitality, and yet increasingly it is harder to find. Sometimes the same institutions (hotels) that welcome tourists serve as detention centres for refugees. If you had to choose in which industry to invest to promote well-being, would you choose hospitality or hostility (arms)?

From classical music to the music of the EHL Committee…

Music from Ilia Zolas and the EHL Music Committee

Once available, talks from live speakers will be publicized in the event website: http://tedx.ehl.edu/. The TEDTalk videos are available from ted.com. For latest news, follow @TEDxEHL on twitter. Enjoy!